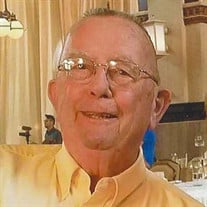 GREENFIELD – Jerry David O’Neill, age 85, of Greenfield, passed away on Sunday, March 22, 2020 at Hancock Regional Hospital. He was born in Indianapolis on August 29, 1934 to David Walter and Christine (Kinney) O’Neill. He graduated from Cathedral High School in 1952. He served in the U.S. Army from 1957-1959. Jerry married Janice (Spaulding) on January 29, 1958 in Loogootee, Indiana. He worked for Eli Lilly in Greenfield from 1963-1991. In 1995, he retired from Dow-Elanco as a senior associate lab technician. Jerry was a member of St. Michael Catholic Church and was on the board for Hancock County Senior Services. Jerry was a member of the Boys Scouts of America Troop #770. He volunteered at church and the Hancock County Food Pantry. Jerry enjoyed woodworking, sports, and spending time with his family. Jerry is survived by his wife, Janice O’Neill of Greenfield; children, Patrick O’Neill of Indianapolis, Kathleen (Mark) Reger of Wilkinson, Michael (Becky) O’Neill of Shirley, and Ann (Bill) Schlosser of Indianapolis; grandchildren, Amanda (Sam) Galbraith of Greenfield, Samantha (Ryan) Hoopingarner of Anderson, Elizabeth (William ) Whitlow of Indianapolis, and Emily Reger of Indianapolis; great-grandchildren, Maryn, Noah, Carter, and Emryn; sister, Linda Schwarz of Greenwood; and a brother, Tom (Haila) O’Neill of Greenfield. He was preceded in death by his parents, David and Christine O’Neill; and a sister, Marian Henry. A memorial gathering will be held on Saturday, August 29, 2020, from 10:00 a.m. until 11:00 a.m. at St. Michael Catholic Church, 519 Jefferson Blvd, Greenfield, IN 46140. A memorial mass will take place immediately following the gathering at 11:00 a.m. Burial took place at Park Cemetery in Greenfield. In lieu of flowers, memorial contributions may be made by mail to St. Michael Catholic School, 515 Jefferson Blvd, Greenfield, IN 46140 or Hancock County Food Pantry, 741 1/2 S. SR 9, Greenfield, IN 46140. Friends may share a memory or condolence at www.erleweinmortuary.com. Arrangements are being handled by Erlewein Mortuary & Crematory in Greenfield.

The family of Jerry O'Neill created this Life Tributes page to make it easy to share your memories.