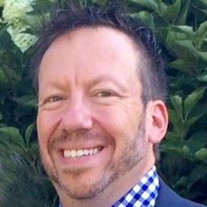 MCCORDSVILLE – Jerold Nickolas “Nick” Bauer, age 48, of McCordsville, passed away on Saturday, August 24, 2019. He was born in East Chicago, Indiana on July 24, 1971 to Jerold W. and Lois (Snyder) Bauer. Nick graduated from Attica High School in 1989. He received his Bachelor of Science in Electrical Engineering from Purdue University in 1994. Nick married Beth (Sawchuk) on April 30, 2009 in Lahaina Maui, Hawaii. He worked for Info Share in Indianapolis as the Director of Sale. Nick was a member of Masonic Lodge Calvin Prather #717 and Delta Chi Fraternity at Purdue University. He enjoyed hunting, camping, and going to the Indianapolis 500. He most of all adored spending time with his family and going fishing and swimming with his daughter, Ellie. Nick has hundreds of friends and was a stranger to nobody. Nick is survived by his wife, Beth Bauer of McCordsville; daughter, Elloise Faith Bauer of McCordsville; brothers, Bill (Valerie) Prange of Arlington, TX, George (Ann) Bauer of Angola, and Russell (Julie) Bauer of Crown Point; sisters, Barbara (David) Pennington of Cedar Lake, Cindy (John) Somers of Angola, Beth (Robert) Dawidiuk of Naperville, IL, and Amy (Pete) Rodrick of Alamo, CA; and 17 nieces and nephews. He was preceded in death by his parents, Jerold and Lois Bauer; and infant sister, Lisa Bauer. A celebration of Nick's life will be held at the Bauer Residence on Saturday, September 14th at 1:00 PM. Memorial contributions may be made by mail to the Wheeler Mission, 205 East New York Street, Indianapolis, IN 46204 , by website at https://wheelermission.org/donate-to-wheeler/. Friends may share a memory or condolence at www.erleweinmortuary.com. Arrangements are being handled by Erlewein Mortuary & Crematory in Fortville.

The family of Jerold "Nick" Bauer created this Life Tributes page to make it easy to share your memories.