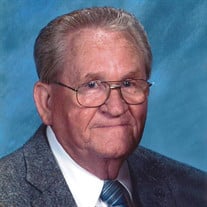 GREENFIELD - James “Jim” Malcolm Smith, 90, of Greenfield, Indiana passed away surrounded by loved ones on June 25, 2019. He was born on October 12, 1928 in Brookville, Indiana to Robert Louis Smith and Sarah Elizabeth (Reese) Smith. Jim began his career as a communications chief in the US Army. He attained the rank of staff sergeant and was a veteran of the Korean War. Jim maintained active membership with his local VFW and American Legion posts for many years following his military service. As a civilian, Jim continued his career in communications as an employee of GTE and served as President of the CWA Local 5770, receiving special recognition for his work with the union’s political action program. He was a charter member of Lutheran Church of the Good Shepherd in Rushville, Indiana where he served in various capacities including Sunday school teacher, President of the congregation, Deacon and Elder. In 2000, he and his family became members of Faith Lutheran Church, Greenfield, Indiana. Jim was an avid gardener who also enjoyed winemaking. His love of music led him to form a band while in the Army and inspired his extensive record collection. Jim also loved to draw and create humorous comics and cartoons to amuse his children. In retirement, Jim enjoyed reading books from his vast library, fishing near his hometown, watching classic movies, and visiting with family and friends. Of all his accomplishments, the most meaningful to him was being a dedicated, loving and supportive husband, father and grandfather. Jim is survived by his wife Maria Smith, his two sisters June (Joe) Turco and Claudia (Melvin) Hertel; his children, Robert (Katy) Smith, Patricia (Robert) Lynch-Donough, Shirley (Yancy) Colvin, Caroline Smith-Ferguson, and Curtis Smith; his grandchildren, Christopher Smith, Danielle Ferguson, Elizabeth Ferguson, Crystal Lynch Baugh and Daniel Lynch and seven great-grandchildren. He was preceded in death by his parents, Robert and Sarah Elizabeth Smith, six sisters and three brothers. Visitation will be held on Tuesday, July 2, 2019, from 10:00 a.m. until 11:00 a.m. at Faith Lutheran Church, 200 W. McKenzie Road, Greenfield, IN 46140. A funeral service will take place immediately following the visitation at 11:00 a.m. Rev. Wm. Daniel O'Connor will be officiating. A private committal will take place at Maple Grove Cemetery in Brookville, IN. In lieu of flowers, memorial contributions can be made to the Building Fund for Faith Lutheran Church, Greenfield, IN or to the Walter Reed Society Warrior/Family Support Fund for combat veterans. Friends may share a memory or condolence at www.erleweinmortuary.com. Arrangements are being handled by Erlewein Mortuary in Greenfield, Indiana.

The family of James M. Smith created this Life Tributes page to make it easy to share your memories.