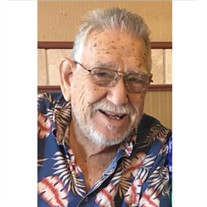 GREENFIELD – James Joseph Repar, age 88, of Greenfield, passed away Thursday, December 23, 2021. Born on March 24, 1933, he was the son of Josip Repar and Katharine (Gimber) Repar. He was a 1951 graduate of Greenfield-Central High School and received his associate degree from Purdue University. He served in the United States Navy during the Korean War. On June 28, 1958, James married the love of his life, Margo Pierson in Greenfield. Before retiring in 1991, he worked for General Motors as an Electronic Technician for 45 years. He was a member of the American Legion 119, the Forty and Eight, St. Michael’s Catholic Church in Greenfield and St. Anne’s Catholic Church in Haines City, FL. He enjoyed fishing, boating, and traveling. He loved tinkering around in the garage, especially with his grandsons. James is survived by his daughters, Margaret M. Repar (Melissa Brim) and Rene Repar (Greg Seeks) both of Greenfield; grandchildren, Colleen Litherland of Lawrence, Kate Brim (Dane Stowe) of Uxbridge, England, James Colip (Kim) of Las Vegas, NV, Kelly Brim of Greenfield, William Colip of Indianapolis, and Zach Seeks (Kayla) of Sumter, SC; and 5 great-grandchildren. He was preceded in death by his parents, Josip and Katharine Repar; wife, Margo Repar; and infant daughter, Marla Ann. A graveside service will take place on June 28, 2022 at Park Cemetery. Arrangements are being handled by Erlewein Mortuary & Crematory in Greenfield. In lieu of flowers, memorial contributions may be made by mail to the Alzheimer’s Association, 50 E 91st St #100, Indianapolis, IN 46240. Friends may share a memory or condolence at www.erleweinmortuary.com.

The family of James Repar created this Life Tributes page to make it easy to share your memories.