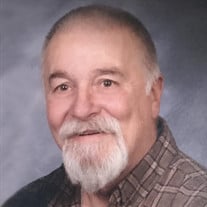 GREENFIELD – James Mitchell “Mick” McKee, age 68, of Greenfield, passed away at home on March 19, 2018 after his mighty battle with head and neck cancer. He was surrounded by many loved ones in his final days. Mick was born in Newport, Arkansas on November 18, 1949 to James O.D. and Roberta Imogene (Burkett) McKee. Mick graduated from Hancock Central in 1968. Mick was a truck driver for over 30 years who went by the handle “Big Brother”. His truck went well over 1 million miles and he dealt with a million truckers. He also worked at IPT for 12 years. He is survived by his mother, Roberta McKee; his wife of 36 years, Margaret M. “Mimi” (Robak) McKee; his children, Jennifer (Kenny) Davis, Brian (Sherri) McKee, James (Julia) McKee, Sarah McKee, and Kyle (Megan) McKee; his brother, Robert (Kathy) McKee; and nephews, Jeff McKee, Webb Dillard, and David Dillard. He adored his grandchildren, Cierra, Shelby, Gavin Mitchell, Kaitlyn, Brock, Sophia, Macey, Benley, Jack Mitchell; and his great-grandchildren, Brooklynn and Emerson. He was preceded in death by his father, O.D. McKee. Mick was larger than life. He was a good friend to many and loved the outdoors, enjoyed drinking around his fire pits, NASCAR, basketball (especially IU), food, his garden, being on any lake, cutting wood, puzzles, being in his barn, and mostly, spending time with family and friends. He was a GYBA coach and a licensed umpire for several years. A celebration of life gathering will be held on Friday, March 23, 2018, from 3:00 p.m. until 8:00 p.m. at Erlewein Mortuary & Crematory, 1484 W. US Hwy. 40, Greenfield, IN 46140. A funeral mass will be held on Saturday, March 24, 2018, at 10:00 a.m. at St. Michael Catholic Church, 519 Jefferson Blvd, Greenfield, IN 46140. Mick and his family would like to thank the doctors and nurses at IU Health Central Indiana Cancer Centers and Transitions Hospice for their excellent care and compassion. In lieu of flowers, memorial contributions may be made by mail to the St. Michael Catholic Church, 519 Jefferson Blvd, Greenfield, IN 46140, Alternatives, Inc. (Hancock County Domestic Violence Shelter), P.O. Box 1302, Anderson, IN 46015, or envelopes will be available at the mortuary and church. Friends may share a memory or a condolence at www.erleweinmortuary.com.

GREENFIELD &#8211; James Mitchell &#8220;Mick&#8221; McKee, age 68, of Greenfield, passed away at home on March 19, 2018 after his mighty battle with head and neck cancer. He was surrounded by many loved ones in his final days. Mick was born... View Obituary & Service Information

The family of James "Mick" Mitchell McKee created this Life Tributes page to make it easy to share your memories.