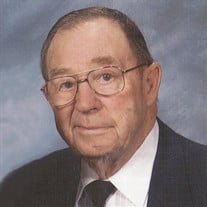 GREENFIELD - James C. “Jim” Gunn, age 92, of Greenfield, passed away July 20, 2018. He was born on March 12, 1926, as the son of Maurice and Ruby (Lantz) Gunn. He graduated from New Palestine High School in 1944 and attended Purdue University. He served in the United States Army during the Korean War in 1950 until 1952. He was married to Dorothy (Cloncs) Gunn for 67 wonderful years. Jim was an active member and advocate for Hancock 4-H Ag. Association, member of Hancock Cattleman’s Association, Indiana Shorthorn Association, and lifetime member of New Palestine United Methodist Church. He is survived by his wife, Dorothy Gunn of Greenfield; sons, John (Teresa) Gunn of Greenfield Steve (Janet) Gunn of Greensburg; 9 grandchildren; and 10 great-grandchildren. He was preceded in death by his parents; daughter, Denise Gunn; son, Tim Gunn; brother, George Gunn; and sister, Flora Jean. A memorial service will be held on Saturday, August 4, 2018, at 1:00 p.m. at New Palestine United Methodist Church, 3565 County Rd 500 W., New Palestine, IN 46163. In lieu of flowers, memorial contributions may be made by mail to the Hancock County 4-H Ag. Association, 620 Apple Street, Greenfield, Indiana 46140, or envelopes will be available at the church. Friends may share a memory or a condolence at www.erleweinmortuary.com. Arrangements are being handled by Erlewein Mortuary & Crematory in Greenfield.

The family of James C. "Jim" Gunn created this Life Tributes page to make it easy to share your memories.