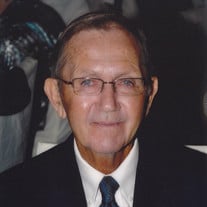 GREENFIELD – James Lee Edwards, age 84, of Greenfield, passed away on Thursday, February 21, 2019 at Hancock Regional Hospital. He was born in Beech Grove on August 28, 1934 to George and Dorothy (Woods) Edwards. James graduated from Southport High School in 1952. He served in the U.S. Army. James married Carolyn (Greene) on August 30, 1959 in Spiceland. He worked for Chevy for 33 years as a tool and die maker and was a member of the Greenfield Country Club. James liked to golf, read, watch the Colts, and travel with his wife. James is survived by his wife, Carolyn Edwards of Greenfield; son, Eric Edwards of Greenfield; nephews, Dennis Bullock and James Bullock both of Morgantown; niece, Malea Richards of Owensboro, Kentucky; and brother and sister-in-law, Joe and Sandra Adkinson of Owensboro, Kentucky. He was preceded in death by his parents, George and Dorothy Edwards; sister, Sandy (Edwards) Akers; mother-in-law, Stella Greene. There will be no services at this time per the family’s wishes. In lieu of flowers, memorial contributions may be made by mail to American Diabetes Association, P.O. Box 15829, Arlington, VA 22215. Friends may share a memory or a condolence at www.erleweinmortuary.com. Arrangements are being handled by Erlewein Mortuary & Crematory in Greenfield.

The family of James L. Edwards created this Life Tributes page to make it easy to share your memories.