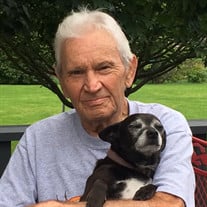 FORTVILLE – Jack Lynn Ratliff, age 84, of Fortville, passed away on Thursday, January 31, 2019. He was born in Lauratown, Arkansas, on January 8, 1935 to Henry Orville and Beulah (Osborne) Ratliff. Jack served in the U.S. Army during the Korean War from 1952-1955. He was awarded the Korean Service Medal, United Nations Service Medal for Korea, and National Defense Service Medal. On April 11, 2014, Jack married Brenda E. (Jones) Howell in Bartow, Florida. Jack was the owner of Ratliff Auto Sales in Fortville for many years. He had many different jobs and was a “jack of all trades.” Jack was a member of Fortville United Methodist Church many years ago, Fortville Lions Club, and Fortville Optimist Club. He was a lifetime member of the VFW and American Legion. Jack was an avid Nascar fan. He loved getting up and going to work every single day on one of his rental properties or another project. He enjoyed restoring old buggies. He was a big country music fan who cherished attending George Jones’ funeral. He was known by his friends and family as a storyteller. He had a memory that was unbelievable when it came to people’s names, places in Fortville, and what cars he had sold to different people. He lived a rich life of many varied experiences and travels and could vividly relate them all. He enjoyed politics and was so proud to be a Democrat and help others. He would watch all the different news stations to get all sides and opinions. He was proud to know all the current events going on in the world and discuss them at the round table with his breakfast buddies over the years. During the last few years, he enjoyed watching many westerns. His two favorites being Gunsmoke and The Rifleman. He loved Johnny Crawford as Mark. Jack is survived by his wife, Brenda Ratliff of Fortville; children, Kellie (Kam) Singh of Nova Scotia, Canada, Kerrie Bonham of Greenwood, Greg Ratliff of Atlanta, GA, Jack (Autumn) Ratliff of Franklin, TN, Jason (Sandra) Ratliff of Fortville, and Jeff Ratliff of Fortville; 11 grandchildren, Amber, Derrick, Zach, Victoria, Joel, Josh, Julia, Jenna, Jordyn, Isabella, and Gabriella; 2 great-grandchildren, Lennon and Morrison; and siblings, Mary Jo Valentine of Pierceton, IN and Julia Smith of Fortville and North Fort Myers Beach, FL. He was preceded in death by his daughter, Rebecca (Lisa) Eckard; son, Chris Ratliff; brother, Jimmie E. Ratliff; and parents, Henry and Beulah Ratliff. A gathering will be held on Thursday, February 7, 2019, from 4:00 p.m. until 6:00 p.m. at Erlewein Mortuary & Crematory, 124 E. Staat Street, Fortville, IN 46040. A celebration of Jack’s life will be held on Friday, February 8, 2019, at 11:00 a.m. at the mortuary. Tina Kerfoot will be officiating. In lieu of flowers, memorial contributions may be made by mail to the donor’s favorite charity. Friends may share a memory or a condolence at www.erleweinmortuary.com.

FORTVILLE &#8211; Jack Lynn Ratliff, age 84, of Fortville, passed away on Thursday, January 31, 2019. He was born in Lauratown, Arkansas, on January 8, 1935 to Henry Orville and Beulah (Osborne) Ratliff. Jack served in the U.S. Army during the... View Obituary & Service Information

The family of Jack L. Ratliff created this Life Tributes page to make it easy to share your memories.