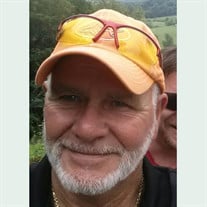 GREENFIELD – Jack P. Orme, age 73, of Greenfield, passed away on Monday, May 7, 2018 at IU North Hospital in Carmel. He was born on July 21, 1944 in Indianapolis as the son of Robert and Hulda “Jean” (Christensen) Orme. He served in the U.S. Army. Jack married Brenda J. (Dillard) on December 22, 1984 in Indianapolis. He was a truck driver for many years. After his retirement he worked for the southside landfill in Indianapolis for numerous years. He was a member of the Teamsters Union #135. Jack liked golfing, riding his motorcycle, and doing yardwork. He enjoyed traveling to Ft. Myers and going to the beach. Jack is survived by his wife, Brenda Orme of Greenfield; sons, Brian Orme of Punta Gorda, FL, Chad Orme of Indianapolis, and Jack P. Orme, Jr. of Indianapolis; siblings, Barbara Skillman of Carmel, Cindy (Mark) Porteous of Florida, Jenny Orme of Colorado, and Jeff (Sheila) Orme of Washington State; and three grandchildren, Brooklyn Orme, Joshua Orme, and Jase Orme. He was preceded in death by his parents. A celebration of Jack’s life will be held at a later date. In lieu of flowers, memorial contributions may be made by mail to the American Cancer Society, P.O. Box 22718, Oklahoma City, OK 73123-1718. Friends may share a memory or a condolence at www.erleweinmortuary.com. Arrangements are being handled by Erlewein Mortuary & Crematory in Greenfield.

The family of Jack P. Orme created this Life Tributes page to make it easy to share your memories.