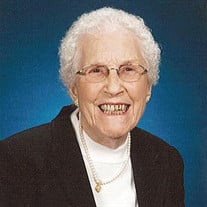 GREENFIELD – Ina Frances (Matlock) Wallace, age 100, a lifelong resident of Greenfield, passed away on Wednesday, March 21, 2018 at Legacy at Springhurst. She was born on October 4, 1917 in Greenfield to the late Charles H. and Katie G. (Jones) Matlock. Ina Frances graduated from Westland High School in 1935. She married Clyde “Bill” Wallace on October 27, 1939 in Hancock County. She was a loving mother and a housewife. Ina was a member of the Mohawk United Methodist Church, where she was a former Sunday School Teacher. Ina is survived by her daughter, Elaine Cox of Greenfield; sister, Janet Dobbins of Maxwell; four grandchildren, Brett Cox, Kevin Cox, Derek Hayes, and Jennifer Hayes; five great-grandchildren; and three great-great-grandchildren. She was preceded in death by her parents; husband, Bill Wallace; daughter, Suzanne Hayes; brothers, Nile Matlock, Loren Matlock, George Matlock, and Charles Matlock; sisters, Adonis Smith and Helen Lucas; and son-in-law, Noble M. Cox. Visitation will be held on Monday, March 26, 2018, from 10:00 a.m. until 12:00 p.m. at Erlewein Mortuary & Crematory, 1484 W. US Hwy. 40, Greenfield, IN 46140. A funeral will take place immediately following the visitation at 12:00 p.m. Reverend Woody Thompson will be officiating. Burial will follow at Park Cemetery in Greenfield. The family would like to thank the staff at Legacy at Springhurst for their loving care. Memorial contributions may be made by mail to the Mohawk United Methodist Church, 2045 W. 400 N., Greenfield, IN 46140 or Hancock Regional Hospital Foundation, Attn: Hospice, 801 N. State Street, Greenfield, IN 46140. Envelopes will be available at the mortuary. Friends may share a memory or a condolence at www.erleweinmortuary.com.

GREENFIELD &#8211; Ina Frances (Matlock) Wallace, age 100, a lifelong resident of Greenfield, passed away on Wednesday, March 21, 2018 at Legacy at Springhurst. She was born on October 4, 1917 in Greenfield to the late Charles H. and Katie... View Obituary & Service Information

The family of Ina Frances (Matlock) Wallace created this Life Tributes page to make it easy to share your memories.