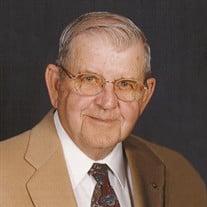 MORRISTOWN – Howard Lynch Spurlock, age 88, of Morristown, passed away on Tuesday, October 16, 2018. He was born on August 28, 1930 in Dayton, OH as the son of Alfred L. and Mary (Lynch) Spurlock. Howard graduated from Clearspring High School and served in the U.S. Army during the Korean War from 1951-1953. In 1973, Howard married Patricia (Smith). He worked for Barry Inc. in Indianapolis for many years. Howard was the part owner and manager of Morristown Hardware. He retired with Soil Service Inc. and later retired with Shelby County Co-Op. He was a member of the American Legion Post 102, a former Boy Scout Leader, and a volunteer with the Morristown Fire Department. Howard was a history buff and enjoyed farming. Howard is survived by his wife, Patricia Spurlock of Morristown; daughter, Tonya (John) Alter of New Palestine; grandchildren, Thomas Spurlock of Florida, Brittany Kantaskas of Florida, Cory (Bethanie) Alter of Greenfield, and Kinzie Alter of Westfield; five great-grandchildren; and sister-in-law, Irene Spurlock of Brownstown. He was preceded in death by his parents, Alfred and Mary Spurlock; son, Wm. Charles Spurlock; and brothers, Alfred B., William Thomas, and Don. Visitation will be held on Friday, October 19, 2018, from 4:00 p.m. until 7:00 p.m. at Erlewein Mortuary & Crematory, 1484 W. US Hwy. 40, Greenfield, IN 46140. A funeral service will be held on Saturday, October 20, 2018, at 11:00 a.m. at the mortuary. Burial will follow at Asbury Cemetery in Morristown. Memorial contributions may be made by mail Wounded Warrior Project, P.O. Box 758517, Topeka, Kansas 66675 or Riley Children's Foundation, 30 South Meridian Street, Suite 200, Indianapolis, IN 46204-3509. Envelopes will be available at the mortuary. Friends may share a memory or a condolence at www.erleweinmortuary.com.

MORRISTOWN &#8211; Howard Lynch Spurlock, age 88, of Morristown, passed away on Tuesday, October 16, 2018. He was born on August 28, 1930 in Dayton, OH as the son of Alfred L. and Mary (Lynch) Spurlock. Howard graduated from Clearspring High... View Obituary & Service Information

The family of Howard Lynch Spurlock created this Life Tributes page to make it easy to share your memories.