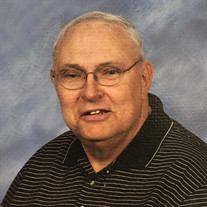 INDIANAPOLIS – Howard Otis Phelps, Jr., age 77, of Indianapolis, passed away on Wednesday, June 26, 2019. He was born in Willow Branch in Hancock County on August 15, 1941 to Howard Otis and Alice May (Snyder) Phelps. He graduated from Boca Ciega High School in St. Petersburg, Florida in 1958 and then went on to earn his technical degree through Ford. Howard married Sandra K. (Chapple) on June 9, 1961 in Greenfield. He worked for Ford Motor Company in Indianapolis for 39 years before retiring in 2002. Howard was a member of Trinity Park United Methodist Church. He enjoyed reading, solving puzzles, and was a real handyman. Howard was an avid fan and liked watching IU basketball, Colts, and Cincinnati Reds. He most of all loved his grandkids. Howard is survived by his wife, Sandy Phelps of Indianapolis; daughters, Barbara (Paul) Jones of Greenfield and Brenda Phelps of Indianapolis; and grandchildren, Ryan Jones of Jasper, Drew Jones of Greenfield, and Jordan Jones of Greenfield. He was preceded in death by his parents; brothers, Joseph Phelps and John Phelps; sister, Mary Jane Phelps; and grandson, Scott Jones. Visitation will be held on Saturday, June 29, 2019, from 2:00 p.m. until 4:00 p.m. at Erlewein Mortuary & Crematory, 1484 W. US Hwy. 40, Greenfield, IN 46140. A funeral service will take place immediately following the visitation at 4:00 p.m. Reverend Larry Van Camp will be officiating. Memorial contributions may be made by mail to Kenneth Butler Memorial Soup Kitchen 202 E. Main Street, Greenfield, IN 46140, or envelopes will be available at the mortuary. Friends may share a memory or condolence at www.erleweinmortuary.com.

INDIANAPOLIS &#8211; Howard Otis Phelps, Jr., age 77, of Indianapolis, passed away on Wednesday, June 26, 2019. He was born in Willow Branch in Hancock County on August 15, 1941 to Howard Otis and Alice May (Snyder) Phelps. He graduated from... View Obituary & Service Information

The family of Howard Phelps Jr. created this Life Tributes page to make it easy to share your memories.