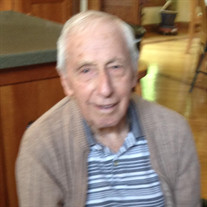 GREENFIELD – Howard Lowell List, age 90, of Greenfield, passed away on Sunday, October 28, 2018 at Golden LivingCenter – Brandywine. He was born in Oaklandon, IN on July 12, 1928 to James H. and Minnie List. Howard graduated from Thorntown High School in 1947 and served in the U.S. Army from 1952-1954. He married Jeanne (Trulock). He was a sheet metal worker in Oaklandon for many years and also was a bus driver for the Lawrence Township Schools. Howard was a member of Greenfield Christian Church. He enjoyed collecting knives and was quite the joker and would put a smile on anyone’s face. Howard is survived by his children, Eddie (Molly) List of Madeira Beach, FL and Pam (George) Paine of Sullivan, OH; step-daughters, Carolyn (Gene) Davis of Lafayette, Joann (Dean) Felker of Greenfield, and Susan Bowers of Brownsburg; 13 grandchildren; and several great-grandchildren; and sister, Edna Grater of Lebanon. He was preceded in death by his parents, James and Minnie List; wife, Jeanne Trulock; brothers, Marcus, Paul, and Hubert; and sisters, Annabelle Pinnick and Vinnie Luper. Visitation will be held on Thursday, November 1, 2018, from 12:00 p.m. until 2:00 p.m. at Erlewein Mortuary & Crematory, 1484 W. US Hwy. 40, Greenfield, IN 46140. A funeral service will take place immediately following the visitation at 2:00 p.m. Rev. Frank H. Everett will be officiating. Burial will follow at Park Cemetery in Greenfield with military rites presented by the active duty. In lieu of flowers, memorial contributions may be made by mail to the Wounded Warrior Project, P.O. Box 758517, Topeka, Kansas 66675 or envelopes will be available at the mortuary. Friends may share a memory or a condolence at www.erleweinmortuary.com.

The family of Howard Lowell List created this Life Tributes page to make it easy to share your memories.