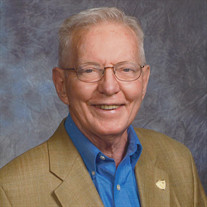 GREENFIELD – Herbert Brown, age 89, of Greenfield, passed away on Wednesday, February 5, 2020. He was born in South Irvine, Kentucky on November 10, 1930 to Fred and Rhoda (Alexander) Brown. A graduate of Estill County High School in Kentucky in 1948. He earned his Bachelor of Science in 1952 and his Master of Science in 1956, both from the University of Kentucky. Herbert then received his PhD in swine nutrition from Iowa State University in 1959. He served in the U.S. Army. Herbert was married to Judy (Lester) for 58 years before she passed away in December 2013. On June 27, 2015 he married Jo Ann (Davis) Agee. He was a research specialist at Elanco in Greenfield and Indianapolis for over 30 years before retiring in 1993. While at University of Kentucky, he was a member of Alpha Gamma Rho fraternity. He was a member and elder of Greenfield Christian Church and a former boy scout leader. Herb enjoyed playing softball, basketball, and running in his younger years. He also enjoyed camping and canoeing with his son, and traveling with Judy. Herb was a lifelong farmer, cattle whisperer, and animal behaviorist. He liked animals and being outdoors on his farm. Herbert is survived by his wife, JoAnn Agee of Greenfield; son, Scott (Kathy) Brown of Galesburg, MI; three grandchildren, Travis Brown, Mikayla Brown, and Mariah (Dylan) Van Wyk; stepdaughters, Sharon (Joe) Rafter of Arizona and Joan Lauman of Maryland; stepson, Trey (Kelly) Agee of Greenfield. He was preceded in death by his parents; first wife, Judy Brown; and brother, Fred Morris Brown. A celebration of Herbert’s life will be held on Saturday, February 8, 2020, at 12:00 p.m. with a gathering one-hour prior at Greenfield Christian Church, 23 N. East Street, Greenfield, IN 46140. David Livingston and Rev. Frank H. Everett will be officiating. In lieu of flowers, memorial contributions may be made by mail to Greenfield Christian Church, 23 N. East Street, Greenfield, IN 46140,St. Labre Indian School, 1000 Tongue River Rd, Ashland, MT 59003, or Hancock County Community Foundation, Thornwood Preserve Endowment Fund., 312 E. Main St., Greenfield, IN 46140. Envelopes will be available at the church. Friends may share a memory or condolence at www.erleweinmortuary.com. Arrangements are being handled by Erlewein Mortuary & Crematory in Greenfield.

GREENFIELD &#8211; Herbert Brown, age 89, of Greenfield, passed away on Wednesday, February 5, 2020. He was born in South Irvine, Kentucky on November 10, 1930 to Fred and Rhoda (Alexander) Brown. A graduate of Estill County High School in... View Obituary & Service Information

The family of Herbert Brown created this Life Tributes page to make it easy to share your memories.