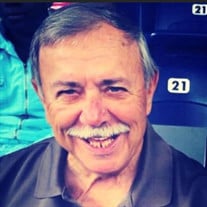 Harry O. Levers Sr., age 76, of Fortville, passed away Friday, June 4, 2021, at Greenwood Healthcare Center. He was born in Washington, Pennsylvania on October 15, 1944 to Ralph Levers and Mable (Smith) Henderson. He graduated from Trinity High School in 1962. He served in the United States Army during the Vietnam War from 1965 to 1971 and received the National Defense Service Medal. On January 14, 1967, Harry married Elaine Winfield in Washington, PA. Harry worked at Ball Corporation as a plant manager for over 30 years before retiring in 2005. He was a member of First United Methodist Church in Pendleton. Harry enjoyed traveling, spending time with his family, and loved working in his garage. He liked cars, both old and new. He loved his grandchildren and liked going to their sporting events. Harry was a devout husband, father, and grandfather. He is survived by his children, Jennifer Levers of Washington, PA, Harry Levers Jr. (Dawn) of Clarkston, MI, James Levers (Kimberly) of McLeansville, NC, Amanda Resler (Jason) of Pendleton, IN; brother, George Levers (Carole) of Bradenton, FL; grandchildren, Abbe, Payton, Olivia, Taylor, Zachary, Cameron, Haley, Ian, Madison, Jenna, Grant, Hannah, Noelle, Owen and Mason; great-grandchildren, Marshall, Waylon, Avianna, Montgomery, Barrett, Naomi, and Paislee. He was preceded in death by his parents, Ralph and Mable; wife, Elaine; grandson, Pierce Resler; and brother, Walter Levers. Visitation will be held on Friday, June 18, 2021, from 1:00 p.m. until 3:00 p.m. at First United Methodist Church, 225 W State St, Pendleton, IN 46064. A funeral service will follow the visitation at 3:00 p.m. Pastor Susan Barrett will be officiating. Burial will take place on July 24, 2021 at Washington Cemetery in Washington, Pennsylvania. Arrangements are being handled by Erlewein Mortuary & Crematory in Greenfield. In lieu of flowers, memorial contributions may be made by mail to the Disabled American Veterans, 3725 Alexandria Pike, Cold Spring, KY 41076, by website at https://www.dav.org/, or envelopes will be available at the church. Friends may share a memory or condolence at www.erleweinmortuary.com.

The family of Harry Levers Sr. created this Life Tributes page to make it easy to share your memories.