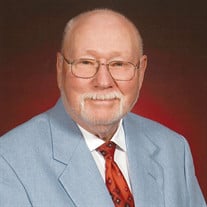 GREENFIELD – Harold E. Jarrett, age 92, of Greenfield, passed away on Wednesday, February 7, 2018 at Springhurst Health Campus. He was born on July 29, 1925 in Hamilton County, IN as the son of Chester H. and Laura B. (Foreman) Jarrett. He graduated from Arsenal Tech. He served in the U.S. Navy during WWII and the Korean War. Harold married Mary Lou (O’Hair) on October 25, 1947 in Indianapolis. He worked for Naval Air Warfare Center in Indianapolis as a tool and gauge inspector for over 32 years before retiring in 1980. He worked for Tuttle Orchards and was a volunteer for Hancock Regional Hospital for many years. Harold and his wife, Mary both served in the Peace Corps for two years in Papua New Guinea. Harold was a member of Mohawk United Methodist Church, where was he was trustee and on the pastor parish committee. He was a 64-year member of the Hancock Masonic Lodge and 20-year member of the Greenfield American Legion. Harold was fortunate to have the opportunity to go on the Indy Honor Flight in 2015 and was the Indiana Torch Carrier for the 2016 Bicentennial. Harold is survived by his sons, David (Susie) Jarrett of Huntington, IN and Kevin (Sheri) Jarrett of Greenfield; daughters, Janet Sue Addison of Bloomington, IN and Debbie (Tim) Robinson of Morristown; sister, Carol (Gary) Miller of Greenfield; 12 grandchildren; and 18 great-grandchildren. He was preceded in death by his parents, Chester and Laura Jarrett; wife, Mary Jarrett; sister, Phyllis Hardwick; son, Thomas Jarrett; and grandson, Adam Jarrett. Visitation will be held on Sunday, February 11, 2018, from 2:00 p.m. until 4:00 p.m. with a Masonic Service at 3:45 p.m. at Erlewein Mortuary & Crematory, 1484 W. US Hwy. 40, Greenfield, IN 46140. A funeral service will be held on Monday, February 12, 2018, at 12:00 p.m. at the mortuary with viewing one hour prior to the service. Reverend Woody Thompson will be officiating. Burial will follow at Mendon Cemetery in Pendleton with military rites presented by the Greenfield Veterans Honor Guard. Memorial contributions may be made by mail to the Indy Honor Flight, PO Box 10, Plainfield, IN 46168 or envelopes will be available at the mortuary. Friends may share a memory or a condolence at www.erleweinmortuary.com.

GREENFIELD &#8211; Harold E. Jarrett, age 92, of Greenfield, passed away on Wednesday, February 7, 2018 at Springhurst Health Campus. He was born on July 29, 1925 in Hamilton County, IN as the son of Chester H. and Laura B. (Foreman) Jarrett.... View Obituary & Service Information

The family of Harold E. Jarrett created this Life Tributes page to make it easy to share your memories.