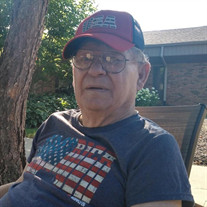 GREENFIELD – Harold E. Janes, age 84, of Greenfield, passed away on Tuesday, May 19, 2020 at Greenfield Healthcare Center. He was born in Indianapolis on October 31, 1935 to Edgar Rufus and Ruby Ellen (Lamb) Janes. Harold graduated from Charlottesville High School in 1953. He served in the U.S. Army. Harold married Sandra Jean (Lesher) on November 24, 1963 in Greenfield. He was a lifelong livestock farmer and also worked for Eli Lilly in Greenfield for many years before retiring. Harold liked being outdoors and taking care of his cattle, pigs, horses and dogs, Daisy and Molly. He loved spending time with his family, which meant the world to him. He would spend the summer making hay for his animals and attending to his crops while making beautiful memories with his family. He also enjoyed camping and traveling. Harold is survived by his sons, Douglas (Angela) Janes and Gary Janes, both of Greenfield; daughter, Tammy (Michael) McMaster of Greenfield; grandchildren, Delanie Janes, Sydney Janes, Raymond (Jordyn) McMaster, and Ryan (Shelby) McMaster; and a brother, Donald (Peggy) Janes of Greenfield. He was preceded in death by his parents, Edgar and Ruby Janes; wife, Sandra Janes; and an infant daughter. A private funeral service will take place with burial at Park Cemetery in Greenfield. Military honors will take place on a later date. In lieu of flowers, memorial contributions may be made by mail to the Greenfield Veterans Honor Guard, 1104 Grayson Drive, Greenfield, IN 46140. Friends may share a memory or condolence at www.erleweinmortuary.com. Arrangements are being handled by Erlewein Mortuary & Crematory in Greenfield.

GREENFIELD &#8211; Harold E. Janes, age 84, of Greenfield, passed away on Tuesday, May 19, 2020 at Greenfield Healthcare Center. He was born in Indianapolis on October 31, 1935 to Edgar Rufus and Ruby Ellen (Lamb) Janes. Harold graduated from... View Obituary & Service Information

The family of Harold E. Janes created this Life Tributes page to make it easy to share your memories.