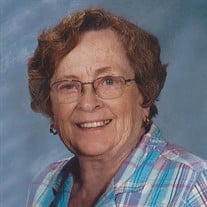 GREENFIELD – Geraldine “Jerry” (Sanders) Walden, age 93, of Greenfield, passed away on Wednesday, November 20, 2019 at Morristown Manor. She was born in Bedford, Iowa on November 15, 1926 to Benjamin Sanders and Willie Ann (Scott) Cameron. She graduated from Lebanon High School in Missouri. Jerry married William L. Walden on July 11, 1945. She was mostly a homemaker and also did some office work with RCA and Hancock Hospital. She was a member of Greenfield Christian Church, where she participated in Naomi’s Circle, taught Sunday School and made prayer squares. She was involved in the poetry club and even wrote a column called Bits of Poetry and Prose. Jerry enjoyed volunteering at the hospital gift shop. She was a very talented artist with oil paintings, piano, knitting, crocheting, and quilting. Jerry is survived by her husband, Bill Walden; daughters, Sandy Holliday and Christine Hoffman; five grandchildren, Todd Hudson, Craig Hudson, Nick Hoffman, Danielle Hoffman, and Rachael Hoffman; eight great-grandchildren; and a sister, Juanita Jackson. She was preceded in death by her parents; grandson, Kurt Hoffman; four brothers; and two sisters. Visitation will be held on Monday, November 25, 2019, from 10:00 a.m. until 12:00 p.m. at Greenfield Christian Church, 23 N. East Street, Greenfield, IN 46140. A funeral service will take place immediately following the visitation at 12:00 p.m. Rev. Frank H. Everett will be officiating. Burial will follow at Park Cemetery in Greenfield. Memorial contributions may be made by mail to Greenfield Christian Church, 23 N. East Street, Greenfield, IN 46140, or envelopes will be available at the church. Friends may share a memory or condolence at www.erleweinmortuary.com. Arrangements are being handled by Erlewein Mortuary & Crematory in Greenfield.

The family of Geraldine "Jerry" Walden created this Life Tributes page to make it easy to share your memories.