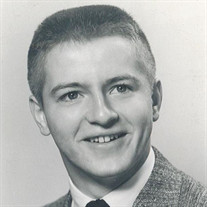 GREENFIELD – George Lee Stanger, age 78, of Greenfield, passed away on Wednesday, February 13, 2019 at Greenfield Healthcare Center. He was born in Bloomington, Indiana on September 3, 1940 to Raymond and Roxie (Bush) Stanger. He graduated from Washington High School in 1958. He proudly served in the U.S. Navy during the Cuban Crisis. George married Judith Ann (Halloran) on December 11, 1961 in Indianapolis. He worked for RCA – Thompson for many years before retiring in 2006. George attended First Church of the Nazarene, Greenfield. Previously, he was a member of the Lawrence Nazarene Church, past fellowship director, board member, and loved music and dancing with his wife. George is survived by his wife, Judith Stanger of Greenfield; sons, Michael (Stacy) Stanger of San Diego, CA and Jeffery (Marlene) Stanger of Indianapolis; five grandchildren, Aubrie, Rylie, Walter, Holden, and Simon. He was preceded in death by his parents, Raymond and Roxie Stanger; and infant sister, Brenda Sue Stanger. A gathering will be held on Saturday, April 27, 2019, from 11:30 a.m. until 1:00 p.m. at First Church of the Nazarene, 1980 S. State Street, Greenfield, IN 46140. A memorial service will immediately follow at 1:00 p.m. Pastor David Huff will be officiating. A private military honors will be conducted by the Greenfield Veterans Honor Guard. In lieu of flowers, memorial contributions may be made by mail to the Alzheimer's Association, 50 E. 91st Street, Suite #100, Indianapolis, IN 46240 or envelopes will be available at the church. Friends may share a memory or a condolence at www.erleweinmortuary.com. Arrangements are being handled by Erlewein Mortuary & Crematory in Greenfield.

GREENFIELD &#8211; George Lee Stanger, age 78, of Greenfield, passed away on Wednesday, February 13, 2019 at Greenfield Healthcare Center. He was born in Bloomington, Indiana on September 3, 1940 to Raymond and Roxie (Bush) Stanger. He graduated... View Obituary & Service Information

The family of George Lee Stanger created this Life Tributes page to make it easy to share your memories.