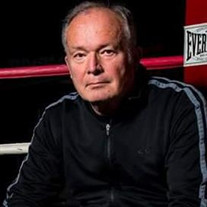 INDIANAPOLIS - Gary L. Boring, 73, of Indianapolis, died Friday, January 28. He was the loving husband of Karyl (Laitinen) and was the fiercely devoted father of Kristen, Michael, and Sarah. Gary was about people. His greatest joy was authentic, real connections with both family and friends. He had a true curiosity about the interests and ideas of those around him and remembered details about everyone he met that made them feel special. He loved any party of two or more, back porch and living room gatherings, church community groups, and loitering after church, donut in hand, to hear whatever you had to say. Most importantly, he was about the communal God who gave him all these things. For the past 10 years, as “Mr. Excitement” at Rock Steady Boxing, Gary was a steadfast cheerleader for others as he worked tirelessly to live well with his own Parkinson’s Disease. At Rock Steady, he found a community of fellow travelers, who boxed and fought against the progression of the disease. He often attributed his very survival to the support, companionship, and rigorous physical training of his fellow Rock Steady boxers, trainers, and his cornerman, Karyl. Gary was born February 20, 1948, in Shelby County, Indiana to M. Eugene Boring and Bernice (Lantz) Boring and grew up on the family farm. He graduated from New Palestine High School, Purdue University (where he sang with the Purdue Glee Club), and Valparaiso University Law School. He established his law practice in Fountaintown, Indiana, and later in New Palestine. In the 1990s, he served as CEO of Countrymark Co-op. In 2003, he returned to finish his law career practicing law in New Palestine, Indiana with his son, Michael. He and Karyl later retired in Indianapolis. Always actively involved in church and community, Gary lent his wisdom and calm presence to many not-for-profit boards. He was an active church leader, most recently at Redeemer Presbyterian and its church plant Fountain Square Presbyterian. Gary is survived by Karyl, his wife of 51 years; his children Kristen (Kale) Cumings of Pittsburg, CA, Michael (Amy) Boring of Indianapolis, and Sarah (Samuel) Jones of Indianapolis, and Elizabeth Sparrow; he had seven grandchildren – Taylor (Davit) Margvelashvili and Kaya Cumings; Michael Boring and Elizabeth Sparrow’s children (Marshall, Stewart, and Nigel Boring); and Fiona and Phoenix Jones; brothers-in-law David (Deb) Laitinen and Bill Harmes, and sisters-in-law Sharon (Greg) Powell, Karen Laitinen, Becky Beroney, and Janice Boring; and numerous cousins, nieces, and nephews. He is preceded in death by his parents, his brother Phillip Boring, and sister Kay Harmes. Visitation will be from 11-2pm at Redeemer Presbyterian (1505 N Delaware St. Indianapolis, IN 46202) with services following at 2pm on Friday, February 4, 2022. Graveside services will occur thereafter at the New Palestine Cemetery (5055 S 500 W, New Palestine, IN 46163). Arrangements are being handled by Erlewein Mortuary & Crematory in Greenfield. The family requests that any memorial donations go to Rock Steady Boxing, Inc., 6847 Hillsdale Ct., Indianapolis, IN 46250, www.rocksteadyboxing.org. Friends may share a memory or condolence at www.erleweinmortuary.com.

INDIANAPOLIS - Gary L. Boring, 73, of Indianapolis, died Friday, January 28. He was the loving husband of Karyl (Laitinen) and was the fiercely devoted father of Kristen, Michael, and Sarah. Gary was about people. His greatest joy was authentic,... View Obituary & Service Information

The family of Gary Boring created this Life Tributes page to make it easy to share your memories.