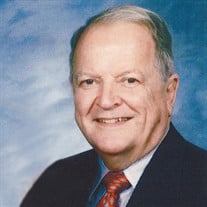 NEW PALESTINE – Fred G. Whitson, age 87, of New Palestine, passed away Wednesday, November 7, 2018 at Community Hospital East. He was born in Hinton, Kentucky on June 11, 1931 to Winfred M. Whitson and Martha H. (Haller) White. Fred graduated from Holmes High School in Covington, KY in 1949 and married Doris M. (Von Gries) on November 4, 1950. Fred and his wife recently celebrated 68 years of marriage. He worked for Keebler Company for over 40 years before retiring in 1987 as the Government Sales Manager. He was a member of St. John Vianney Catholic Church in Fishers and lifetime member of Knights of Columbus and a Kentucky Colonel. Fred liked repairing electronics, and refurbishing computers to donate to the Boys and Girls Club of Central Florida. He was also instrumental in the development and expansion of The Villages Computer Club. He loved traveling, vacationing, and most especially spending time with his family. Fred is survived by his wife, Doris; children, Debbie (Michael) Wright of New Palestine, Rick (Susan) Whitson of Batavia, IL, Brenda (Chris) Lettieri of Arlington Heights, IL, Jeff (Sue) Whitson of Dunlap, IL, and Kevin (Dawn) Whitson of Aurora, IL; 14 grandchildren; and 20 great-grandchildren. He was preceded in death by his parents; two brothers, Ray Whitson and Bill Wiegold; and sister, Wanda Whitson. A funeral mass will be held on Monday, November 26, 2018, at 10:30 a.m. CST at St. Margaret Mary Catholic Church in Naperville, IL. A private inurnment will take place at Queen of Heaven Cemetery in Hillside, IL. Memorial contributions may be made by mail to the Childhood Cancer Research/American Cancer Society. Friends may share a memory or a condolence at www.erleweinmortuary.com. Arrangements are being handled by Erlewein Mortuary & Crematory in Greenfield.

The family of Fred G. Whitson created this Life Tributes page to make it easy to share your memories.