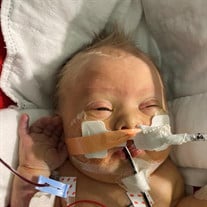 Finnick Wayne Solari passed peacefully in the arms of his loving mothers on Wednesday, March 2, 2022 at St. Vincent Women’s Hospital in Indianapolis, IN. Finnick Wayne was born on February 21, 2022 to Kaitlyn F. (Redman) Solari and Morgan L. Solari. Finnick’s life was an extra precious gift to his family who had long awaited his arrival. He wanted to make sure everyone knew just how special he was by arriving with an extra 21st chromosome, an extra right thumb, and extra blonde hair. In his 9 short days here on Earth, he was known for flipping his wrists and sticking out his tongue which showed that he clearly had a sassy personality. He also loved getting attention and having his head rubbed by his mamas and NICU family. His mamas believe that, like his big brother, he would have loved chocolate milk (as his mama drank plenty throughout pregnancy). Everyone who met him ironically agreed that his favorite color was likely green, and that he would have loved dinosaurs. In place of the DAISY award, “The Finnick Award” was created and given in the form of a dinosaur pin to all of his loving caretakers during his time in the St. Vincent Women’s NICU. It has become his legacy. Finnick touched the lives of many and was deeply loved by his family and friends. He is survived by his mama, Kaitlyn F. (Redman) Solari, mommy, Morgan L. Solari, and big brother, Arrow James Solari; grandparents, Kimberly and William Redman, Janine and Jeffrey Solari; aunts, Mackenzie Warrick, Karagan Redman, and Kamryn Adkins; and great-grandmother, Sandra Sorukas whose unwavering prayers for Finnick have blessed him since before he was even created. He was preceded in death by his great-uncle and namesake, Wayne Kwiatkowski. Memorial visitation will be held on Saturday, March 12, 2022, from 2:00 p.m. until 4:00 p.m. at Palmer Funeral Home - Welsheimer Chapel North, 17033 Cleveland Rd., South Bend, IN 46335. A second memorial visitation will be held on Sunday, March 13, 2022, from 2:00 p.m. until 4:00 p.m. at Erlewein Mortuary & Crematory, 1484 W. US 40, Greenfield, IN 46140. In lieu of flowers please consider donating to either of the following organizations: St. Vincent Women’s Hospital NICU https://give.stvincent.org/donate (online) 8402 Harcourt Rd., Suite 210, Indianapolis, IN 46260 (by mail) *Please include Finnick’s name when donating Michiana Down Syndrome https://michianadownsyndrome.org/donate/ (online) P.O. Box 1454, Granger, IN 46530 (by mail) Friends and family may share condolences at www.erleweinmortuary.com.

Finnick Wayne Solari passed peacefully in the arms of his loving mothers on Wednesday, March 2, 2022 at St. Vincent Women&#8217;s Hospital in Indianapolis, IN. Finnick Wayne was born on February 21, 2022 to Kaitlyn F. (Redman) Solari and Morgan... View Obituary & Service Information

The family of Finnick Wayne Solari created this Life Tributes page to make it easy to share your memories.

Finnick Wayne Solari passed peacefully in the arms of his loving...