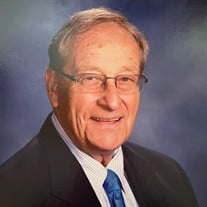 GREENFIELD – Faye Monroe Crowell, age 84, of Greenfield, passed away Sunday, February 13, 2022 at Traditions at Brookside, McCordsville, IN. He was born at the Whitach Clinic in Milan, IN on March 3, 1937 to Monroe and Lillian May (Hoyer) Crowell. He attended elementary schools in the Batesville community and graduated from Napoleon High School, class of 1955. He worked at Hillenbrand’s, Batesville, and drove a milk truck before going to work at Eli Lilly’s in Greenfield January, 1957. He joined the U.S. Navy August, 1959 serving on the USS Forrestal in the Mediterranean and ending his tour of duty in Bethesda, Maryland September, 1961. After his service he went back to work at Lilly’s, retiring in December, 1993. He married Barbara Ann Dodds Elliot on December 8, 1962 in Indianapolis, IN. Mr. Crowell was a 63 ½ year Masonic member, serving as Worshipful Master and Secretary of New Palestine Lodge No. 404, with membership history in Osgood, Irvington and Greenfield. Faye transferred membership to Greenfield York Rite in 1997 and was Past High Priest of Irvington Chapter No. 158. He received the Award of Gold in 2008. Faye was a member of the Hancock County Shrine Club, where he was Past President and enjoyed doing parades with his flivver. He was also a member of the New Palestine Lions Club and attended the Friend’s Church in Spiceland and sang in the choir when he was able. After retirement, Faye had several part-time jobs but he really liked repairing garden tractors and lawn mowers. He enjoyed gardening and going to tractor shows. Faye loved to visit with people. He is survived by his daughter, Julie Marie (Larry) Lucas, granddaughters, Kandice Marie (Kyle) Conner, Leah and Lauren Lucas, three great grandchildren, Kash Edward and Kinley Marie Conner, and Raylea Richey. He is survived by his brother, Bill (Judy) Crowell, sisters, Vera Hunteman, Mona Underhill and many nieces and nephews. Preceding him in death are his wife, parents, his sister and husband, Jeanette and Lloyd Selke, brother-in-laws, Ivan Hunteman, Dale Underhill, and sister-in-law, Betty Dodds Zarse. Visitation will be held on Tuesday, February 22, 2022, from 3:00 p.m. until 7:00 p.m. at Erlewein Mortuary & Crematory, 1484 W. US Hwy. 40, Greenfield, IN 46140, with Masonic services at 6:30 p.m.. A funeral service will be held on Wednesday, February 23, 2022, at 11:00 a.m. at the mortuary. David Brock of Spiceland Friends Church will be officiating. Military Rites and Burial will follow at Washington Park East Cemetery, Indianapolis, IN. In lieu of flowers, memorial contributions may be made by mail to the Indy Honor Flight, PO Box 10, Plainfield, IN 46168, by website at www.indyhonorflight.org , or envelopes will be available at the mortuary. Faye was looking forward to being on Flight #33 on April 16, 2022. The flight had been postponed for 2 years due to Covid. Friends may share a memory or condolence at www.erleweinmortuary.com.

GREENFIELD &#8211; Faye Monroe Crowell, age 84, of Greenfield, passed away Sunday, February 13, 2022 at Traditions at Brookside, McCordsville, IN. He was born at the Whitach Clinic in Milan, IN on March 3, 1937 to Monroe and Lillian May (Hoyer)... View Obituary & Service Information

The family of Faye M. Crowell created this Life Tributes page to make it easy to share your memories.