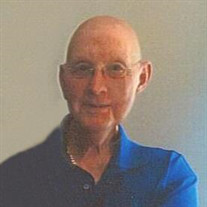 NEW PALESTINE - Ernest R. “Ernie” Fee, age 78, passed away on Monday, December 11, 2017 at St. Vincent Hospital in Indianapolis, surrounded by his loving wife, family and friends. Ernie was born in London, Kentucky on June 16, 1939 to Taylor and Clara Fee. He was the second of 12 children. He moved to Indianapolis, Indiana, in 1957 at the age of 17 to work at the new Ford Motor Company plant where he continued to work until 1987. He then delivered pool water for Vic’s Pool Water of New Palestine until retirement. He was preceded in death by his parents, his sister Louise, and his brother Bill. He is survived by his wife of 52 years Jean (Peacock) Fee; daughters Berneda (Terry) Baker, Markeeta (Orie) Hyde, Amy (Fee) Griffin, and Wendy (Jeff) Nichols; grandchildren Cam (Rachel) Hyde, Torie (Daniel) Hampton, Corey Hyde, Terra Baker, Jordan Nichols, Marissa Crosby, Mikaela Crosby, Lauren Nichols, and Makenna Griffin; and great-grandchildren Kolton, Karaline, and Charis. Visitation will be held on Thursday, December 14, 2017, from 11:00 a.m. until 1:00 p.m. at Erlewein Mortuary & Crematory, 1484 W. US Hwy. 40, Greenfield, IN 46140. A funeral service will take place immediately following the visitation at 1:00 p.m. Burial will follow at New Palestine Cemetery on County Road 500W in New Palestine. In lieu of flowers, memorial contributions may be made by mail to the Hancock Regional Hospital Foundation, Hospice, 801 N. State Street, Greenfield, IN 46140 or envelopes will be available at the mortuary. Friends may share a memory or a condolence at www.erleweinmortuary.com.

The family of Ernest R. "Ernie" Fee created this Life Tributes page to make it easy to share your memories.