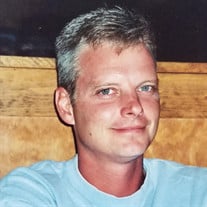 CARMEL - Erik J. Nelson, age 51, of Carmel, passed away Monday, February 18, 2019 of a sudden heart attack at home. He was born in Rushville on October 17, 1967 to John W. and Margaret L. (Eggers) Nelson. Erik graduated from Rushville Consolidated High School in 1986. Erik was known as a detailed and dedicated drywaller for 28 years. He was the President and CEO of his own company in Carmel, Nelson Drywall Inc. When he wasn’t working, he loved spending time with his children, and training his dog, Chief. He is survived by the mother of his children and first wife, Marlena Nelson; second wife, Miriam Hagans; daughter, Taylor Nelson; son, Sean Nelson; and five older siblings: Cynthia (Doug) Nurss; Christie Nelson; Carol (Ken) Watson; Claire (Eric) Steiner; and Scott (Becky) Nelson. Erik is preceded in death by his parents, John and Margaret Nelson. Visitation will be held on Thursday, February 28, 2019, from 11:00 a.m. until 12:45 p.m. at Zion Lutheran Church, 6513 W. 300 S., New Palestine, IN 46163. Pastor Jason Taylor will be officiating the funeral service following the visitation at 1:00 pm, also at the church. Burial will follow at Arlington East Hill Cemetery in Arlington, IN. In lieu of flowers, memorial contributions may be made by mail to Zion Lutheran Church, 6513 W. 300 S., New Palestine, IN 46163 or envelopes will be available at the church. Friends may share a memory or a condolence at www.erleweinmortuary.com. Arrangements are being handled by Erlewein Mortuary & Crematory in Greenfield.

The family of Erik J. Nelson created this Life Tributes page to make it easy to share your memories.