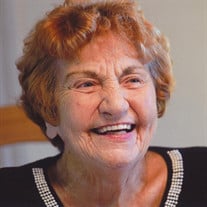 GREENFIELD – Eileen McClarnon was born in July 1926 in Arkansas and died at her home in Greenfield on March 3, 2019. She grew up in Memphis, Tennessee, where she loved to go jitterbugging at the famous Peabody Hotel. During WWII she joined the Women’s Army Crops and was sent to Wales. She was featured in an article in the Greenfield Reporter on Veterans Day, 2018. It was during her service in the British Isles that she met her husband George, as they were both stationed there. At war’s end, they both returned to the US, were married, and attended Michigan State University, where George studied veterinary medicine, and Eileen majored in philosophy and religion. Such was her knowledge of world religions that several years ago she, although a member of the Methodist Church in Knightstown, was offered, and accepted, an offer from the Knightstown Quaker Church to teach a religion course from the pulpit. It was an experience that she always cherished. Eileen was an avid reader and was prouder of her library than most of her other possessions. In addition to reading, cooking, and caring for her family, she enjoyed being a member of two bridge clubs. She was also passionate about keeping up with current events. From 1954 to 1977 Eileen served as her husband’s veterinary assistant, both in Knightstown and Greenfield. From 1976 to 2000 she was co-owner of Bilmac Farm, a standard bred breeding operation. Eileen is survived by three children, Melanie, Jeff, and Laurie, eight grandchildren, and seven great-grandchildren. All of the grandchildren and the older great-grandchildren loved to refer to her as “darling Grammy”. Per her instruction, there will be no calling or service. Anyone wishing to honor her memory would be encouraged to do a kind deed, as she frequently did, and respond to any kind deed by passing it forward. Arrangements are being handled by Erlewein Mortuary & Crematory in Greenfield.

GREENFIELD &#8211; Eileen McClarnon was born in July 1926 in Arkansas and died at her home in Greenfield on March 3, 2019. She grew up in Memphis, Tennessee, where she loved to go jitterbugging at the famous Peabody Hotel. During WWII she... View Obituary & Service Information

The family of Eileen McClarnon created this Life Tributes page to make it easy to share your memories.

GREENFIELD – Eileen McClarnon was born in July 1926 in Arkansas...