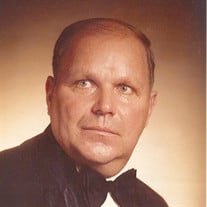 GREENFIELD - Earl Glen Hartman, age 84, of Greenfield, passed away Thursday, April 19, 2018 at AMG Specialty Hospital. He was born on November 29, 1933 in Marion County as the son of Albert William Hartman and Martha Hartman. He graduated from Mt. Comfort High School in 1951 and served in the United States Army from 1954 until 1956. He married Jacqualine A. (McQuinn) Hartman on September 28, 1957. He worked for Ford Motor Company for 42 years before retiring. Mr. Hartman was a member of the Irvington Masonic Lodge and the Hancock County Shrine Club. He was a previous member of St. John United Church of Christ in Cumberland and helped run the cemetery for many years. Earl was currently attending Brookville Road Community Church in New Palestine. He also loved fishing and farming. He is survived by his wife, Jackie Hartman; sons, Mike Hartman and Mark (Darlene) Hartman; sisters, Wanda Horn and Sharon Wildman; six grandchildren, Chris (Melissa) Hartman, Thad (Kate) Hartman, Ashley Hartman, Alison (Lewis) Hartman Gill, Charlie (Sarah) Hartman, and Nathan (Trish) May; and seven great- grandchildren. He was preceded in death by his parents and two brothers, Albert Hartman Jr. and Richard Hartman. Visitation will be held on Tuesday, April 24, 2018, from 3:00 p.m. until 7:00 p.m. at Erlewein Mortuary & Crematory, 1484 W. US Hwy. 40, Greenfield, IN 46140. A masonic service will take place during visitation at 5:45 p.m. Earl's funeral service will be held on Wednesday, April 25, 2018, at 10:30 a.m., also at the mortuary. Pastor Andy Flink will be officiating. Burial will follow at St. John United Church of Christ Cemetery, with military rites presented by the Greenfield Veterans Military Honor Guard. In lieu of flowers, memorial contributions may be made by mail to the Shriner’s Hospitals for Children, 2900 Rocky Point Dr., Tampa, FL 33607 or envelopes will be available at the mortuary. Friends may share a memory or a condolence at www.erleweinmortuary.com.

GREENFIELD - Earl Glen Hartman, age 84, of Greenfield, passed away Thursday, April 19, 2018 at AMG Specialty Hospital. He was born on November 29, 1933 in Marion County as the son of Albert William Hartman and Martha Hartman. He graduated from... View Obituary & Service Information

The family of Earl Glen Hartman created this Life Tributes page to make it easy to share your memories.