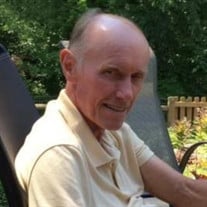 GREENFIELD – Dwight Edward Fraze, age 79, of Greenfield, passed away on Wednesday, June 1, 2022. He was born in Saratoga, Indiana on May 14, 1943 to James Thurl and Martha Ruth (Mason) Fraze. Dwight graduated from Ward Jackson High School and earned his bachelor’s degree in computer science from Purdue University. He served in the United States Air Force. Dwight married Janet Marie (Swift) on May 17, 1969 in Indianapolis. He worked for Inland Container Corporation and IBM as a software specialist. Dwight enjoyed fishing and sports, especially football, basketball, baseball, and racing. He loved the outdoors, having grown up on a farm. He was especially proud that he was able to run the family farm later in life, even while battling cancer. Dwight was a quiet and reserved hard worker, but so loving and was quick to smile and laugh. He cherished time with his family and grandchildren. Dwight is survived by his loving wife, Janet Fraze of Greenfield; son, Michael (Beth) Fraze of Dallas, TX; daughter, Michelle (Darren) Laging of Denver, CO; four grandchildren, Jacob and Nicholas Fraze, and Addison and Caleb Laging; and two step grandchildren, Megan and Brandon Meier. He was preceded in death by his parents, James and Martha Fraze; and a brother, James Fraze. Visitation will be held on Tuesday, June 7, 2022, from 3:00 p.m. until 5:00 p.m. at Erlewein Mortuary & Crematory, 1484 W. US Hwy. 40, Greenfield, IN 46140. Memorial contributions may be made by mail to the Alzheimer’s Association, 225 N. Michigan Ave., Floor 17, Chicago, IL 60601 or IU Simon Cancer Center, c/o IU Foundation, PO Box 7072, Indianapolis, IN 46207. Envelopes will be available at the mortuary. Friends may share a memory or condolence at www.erleweinmortuary.com.

The family of Dwight E. Fraze created this Life Tributes page to make it easy to share your memories.