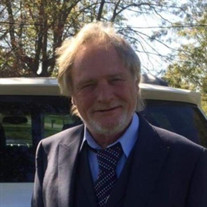 FORTVILLE – Douglas Bryan Martin, age 61, of Fortville, passed away on Thursday, March 19, 2020. He was born in Indianapolis on October 14, 1958. He was a self-employed general contractor for many years. Doug enjoyed fishing and playing cards. He loved spending time with his grandchildren and having cookouts with his family. Doug is survived by his companion, Brenda Liscomb of Fortville; son, Richard Martin of Arizona; step-son, Steve Liscomb of Fortville; step-daughters, Windi Herbert (Tony Penrod) of Fortville; Tina (Shawn) Davenport of Anderson; grandchildren, Kyle Martin, Austin Herbert, Caleb Herbert, and Isabella Liscomb; brothers, Kenny Martin of Indianapolis and Denny (Pat) Martin of Fishers; sister, Connie (Harry) Gehring of Indianapolis; and several nieces and nephews. He was preceded in death by his fathers, Jerry Martin and Ervin Murphy; mother, Nancy Murphy; brother, Steve Martin; sister, Amber Hanisch; and son-in-law, Craig Herbert Due to current circumstances and the mandate made by Governor Holcomb regarding non-essential travel, a memorial gathering and service will be held on a later date. In lieu of flowers, memorial contributions may be made by mail to the Peyton Manning Children’s Hospital, 8402 Harcourt Rd, Ste 210, Indianapolis, IN 46260 or please consider the needs of Doug’s significant other Brenda by sending memorial contributions to Erlewein Mortuary, 1484 W. US Hwy. 40, Greenfield, IN 46140. Envelopes will be available at the mortuary. Friends may share a memory or condolence at www.erleweinmortuary.com. Arrangements are being handled by Erlewein Mortuary & Crematory in Greenfield.

FORTVILLE &#8211; Douglas Bryan Martin, age 61, of Fortville, passed away on Thursday, March 19, 2020. He was born in Indianapolis on October 14, 1958. He was a self-employed general contractor for many years. Doug enjoyed fishing and playing... View Obituary & Service Information

The family of Douglas B. Martin created this Life Tributes page to make it easy to share your memories.