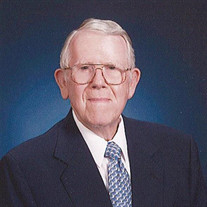 GREENFIELD – Douglas D. “Doug” McAlister, age 95, of Greenfield, passed away peacefully on Thursday, May 16, 2019. He was born August 15, 1923 in Birmingham, Alabama. His parents were Mr. and Mrs. Sam Y. McAlister. He is survived by his daughter, Elaine Knight (Lee) of Greenfield and his son, Richard McAlister (Kim) of Kerrville, Texas. His grandchildren are Allison Kinion (Roger) of Greenfield, Indiana and Christin Sturgill (Garrett) of Uvalde, Texas and Rachel McAlister of Pflugerville, Texas. His great grandchildren are Hannah and Ruston Kinion of Greenfield, Indiana and soon to be born Wyatt Sturgill of Uvalde, Texas. He is survived also by brothers, Charles and Murray “Butch” (Sherri) McAlister of Volusia County, Florida. He was preceded in death by his parents; wife, Margaret McAlister; sister, Barbara (Edward) Lewis; and granddaughter, Heather (Bill) Bush of Mobile, Alabama. He was a veteran of World War II and after graduating with honors from the U.S. Merchant Marine Academy in New London, Connecticut he served as an engineering officer on various merchant ships in the North and South Atlantic and Arctic Oceans where he survived the sinking of his ship by a German submarine. He also survived attacking enemy aircraft in the Normandy invasion of France while making repeated trips across the English Channel bringing troops and equipment to the invasion beaches. He was active in the program of the Boys Scout of America, serving as Assistant Scoutmaster of Troop 216 in Trussville, Alabama for several years. He was also involved in the Royal Ambassadors program of the Southern Baptist Convention, having served as State Director of the program in Alabama. He and Margaret enjoyed RV traveling and as time would permit, they toured the United States for 24 years. They loved music, boating, fishing, and traveling. The National Parks were their favorite destinations, especially Yellowstone National Park. After 43 years in business where he was Vice-President and Sales Manager of an industrial mill supply corporation, he retired in Birmingham, Alabama in 1989. He was also a Senior Member of the SME (Society of Manufacturing Engineers). He served as an ordained Deacon in several Southern Baptist Convention churches beginning in 1963. He also served 43 years as a Sunday School teacher in several churches until 2008. He had been an active member and teacher at the First Baptist Church in Daytona Beach since 1992. He had earlier served as an active Deacon and Sunday School Director at the First Baptist Church of South Daytona. He was most recently a member of Calvary Baptist Church in Greenfield and the Cornerstone Sunday School class. He could be described as one member of America’s greatest generation. He always strived to do his best. Visitation will be held on Tuesday, May 21, 2019, from 1:00 p.m. until 3:00 p.m. at Erlewein Mortuary & Crematory, 1484 W. US Hwy. 40, Greenfield, IN 46140. A funeral service will take place immediately following the service at 3:00 p.m. Reverend Roger Kinion and Reverend Richard McAlister will be officiating. A graveside service will take place on Friday, May 24, 2019, at 2:00 p.m. at Daytona Memorial Park in Daytona Beach, Florida. In lieu of flowers, memorial contributions may be made by mail to Calvary Baptist Church, 1450 W. Main Street, Greenfield, IN 46140 or envelopes will be available at the mortuary. Friends may share a memory or a condolence at www.erleweinmortuary.com.

The family of Douglas "Doug" McAlister created this Life Tributes page to make it easy to share your memories.