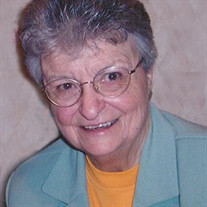 GREENFIELD – Dorothy M. (Schober) Boruff, age 92, of Greenfield, passed away Thursday, December 21, 2017, at Hancock Regional Hospital. She was born on November 5, 1925 in Indianapolis as the daughter of Arthur and Grace Schober. She graduated from Ben Davis High School in 1943. Dorothy received her Bachelor’s Degree in Education from Indiana Central University and her Masters of Science from Butler University in 1965. She worked for Oaklandon and Indian Creek Elementary in Lawrence Township for 20 years before retiring in 1988. Dorothy was a member of Greenfield Christian Church and was an ordained lay minister and Sunday school teacher. She was also a member of the Lawrence Teachers’ Association. In her younger years she was very active and loved to play basketball in high school and college, as well as softball in church leagues. Dorothy also loved to hike at Indiana state parks. She is survived by her sons, David (Kimberly) Boruff of Indianapolis, and Brian (Kathy) Boruff of Boulder, CO and their father, Harold (Ruth) Boruff of Indianapolis; grandson, Alex Boruff of Valley Cottage, NY; and step-grandson, William Freeland of Indianapolis. She was preceded in death by her parents, Arthur and Grace Schober; brothers, Arthur “Paul” Schober, Richard Schober, Russell Schober, and Merle “Bud” Schober. Visitation will be held on Thursday, December 28, 2017, from 2:00 p.m. until 4:00 p.m. at Greenfield Christian Church, 23 N East St, Greenfield, IN 46140. A funeral service will be held immediately following visitation at 4:00 p.m. also at the church. Pastor Frank Everett will be officiating. Entombment will follow at Washington Park East Cemetery in Indianapolis at a later date. Arrangements are being handled by Erlewein Mortuary & Crematory in Greenfield. In lieu of flowers, memorial contributions may be made by mail to the Greenfield Christian Church, 23 N East St, Greenfield, IN 46140, or envelopes will be available at the church. Friends may share a memory or a condolence at www.erleweinmortuary.com.

GREENFIELD &#8211; Dorothy M. (Schober) Boruff, age 92, of Greenfield, passed away Thursday, December 21, 2017, at Hancock Regional Hospital. She was born on November 5, 1925 in Indianapolis as the daughter of Arthur and Grace Schober. She... View Obituary & Service Information

The family of Dorothy Marie (Schober) Boruff created this Life Tributes page to make it easy to share your memories.