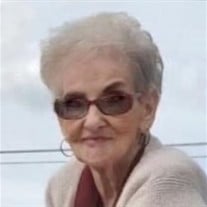 MCCORDSVILLE - Doris May Hiday, age 94, of McCordsville, IN, died at 5:30 AM, Monday, December 7, 2020 at The Golden Living Center/Brandywine, Greenfield, IN. She was born May 11, 1926 in Brightwood, Indiana, to Paul and Mildred Cross. She married (1st) Ralph (Red) Chappell on July 9, 1948. They had 5 children. They divorced in 1973. Ralph passed away on June 1, 1997 in Fortville, IN. She married (2nd) Stewart S. Hiday on August 16, 1973. Stewart passed away on January 10, 2011. Also surviving is a Sister Marietta (William) Bundy, Indianapolis, IN and a brother James (Cheryl) Cross of Fortville, IN., two sons. Steve Chappell, McCordsville, IN., and Randy (Shannon) Chappell of Fortville, IN., 3 daughters, Glenda (Roger) Prewitt of Pocatello, ID., Brenda Chappell of Greenfield, IN and Cindy (Charles) Martin of Muncie, IN., 4 grandsons, Scott Chappell, McCordsville, IN., Jeff Prewitt of Pocatello, ID., Christopher Chappell, Fortville, IN., Cameron Chappell, Indianapolis, IN., 5 granddaughters, Amanda (Nathan) Redden, Comanche, TX., Jennifer Martin Crouch, Muncie, IN., Jammie (Dairel) Johns, Mooresville, IN.,Christy (Collin) Schneider, Westfield, IN., Amanda Troxell, Fortville, IN., Doris also has 12 great-grandchildren. Her parents Paul and Mildred (Wallsmith) Cross and her sister Margery Jean (John Robert) Leary and her brother Robert Eugene (Joan) Cross preceded her in death. Doris was a longtime resident of Fortville, IN., where she lived for many years. She graduated from Fortville High School, Fortville, IN. She loved her family very much and was devoted to all 5 children and especially her daughter Brenda May who had been injured in an automobile accident at an early age. There will be a graveside service on Saturday, December 12, 2020, at 11:00 a.m. at Gravel Lawn Cemetery, 9088 W. County Road 1025 South, Fortville, IN 46040. John Burkett will be officiating the service. In lieu of flowers, memorial contributions may be made by mail the Hospice at Hancock Regional Hospital Foundation, 801 N State St, Greenfield, IN 46140. Friends may share a memory or condolence at www.erleweinmortuary.com. Arrangements are being handled by Erlewein Mortuary & Crematory in Fortville.

MCCORDSVILLE - Doris May Hiday, age 94, of McCordsville, IN, died at 5:30 AM, Monday, December 7, 2020 at The Golden Living Center/Brandywine, Greenfield, IN. She was born May 11, 1926 in Brightwood, Indiana, to Paul and Mildred Cross. She married... View Obituary & Service Information

The family of Doris Hiday created this Life Tributes page to make it easy to share your memories.