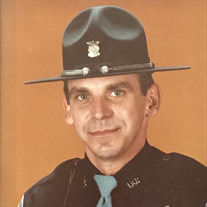 GREENFIELD – Donovan C. Lindsay, age 75, of Greenfield, passed away on Monday, February 18, 2019 at Hancock Regional Hospital. He was born in Shelbyville on August 16, 1943 to Clyde A. and Marthena D. (Siders) Lindsay. He graduated from Greenfield High School in 1962. He then went on and graduated from the Indianapolis Police Academy and Indiana State Police Academy. Donovan married Karen (Eck) on February 21, 1964 in Shelby County. He started his police career with the Greenfield Police Department in July of 1963 in 1967 he applied to the Indiana State Police and was appointed November 11, 1967. He began his career at the Indianapolis district and later served out of Pendleton Post and earned his rank of Master Trooper before retiring in 1989. Donovan was a member of Trinity Park United Methodist Church, Hancock Lodge F&AM 101, State Police Alliance, and founding member of Fraternal Order of Police Lodge 140. He was awarded two Sagamore of the Wabash from Governor Roger Branigan in 1969 and Governor Otis Bowen in 1979. Donovan passions include reading, guns, history, and pruning his bushes in the front yard. He adored spending time with his family and grandchildren. The past 12 years he served as bailiff for Judge Dan Marshall in Superior Court 2 in Hancock County. Donovan is survived by his wife, Karen Lindsay; sons, Michael Lindsay, Craig (Rochelle) Lindsay, and Patrick Lindsay; 10 grandchildren, Caitlyn, Chloe, Cassidy, Madison, Mahren, Ainsley, William, Emily, Natalie, and Annie; 3 great-grandchildren, Lilly, Ashlyn, and Cora; sister, Shirley (Jack) Smith; and many nieces and nephews. He was preceded in death by his parents, Clyde and Marthena Lindsay; and brothers, Robert Lindsay and Al Lindsay. Visitation will be held on Saturday, February 23, 2019, from 2:00 p.m. until 8:00 p.m. at Erlewein Mortuary & Crematory, 1484 W. US Hwy. 40, Greenfield, IN 46140. A funeral service will be held on Sunday, February 24, 2019, at 2:00 p.m. with viewing one hour prior to the service at Trinity Park United Methodist Church, 207 W. Park Ave, Greenfield, IN 46140. Pastor Larry Van Camp will be officiating. Inurnment will take place at a later date at Asbury Cemetery in Morristown. In lieu of flowers, memorial contributions may be made by mail to Trinity Park United Methodist Church, 207 W. Park Ave, Greenfield, IN 46140, Hancock County Fraternal Order of Police #140, 400 E. Davis Rd, Greenfield, IN 46140 or Sue Ann Wortman Cancer Center, 801 N. State Street, Greenfield, IN 46140. Envelopes will be available at the mortuary and church. Friends may share a memory or a condolence at www.erleweinmortuary.com.

GREENFIELD &#8211; Donovan C. Lindsay, age 75, of Greenfield, passed away on Monday, February 18, 2019 at Hancock Regional Hospital. He was born in Shelbyville on August 16, 1943 to Clyde A. and Marthena D. (Siders) Lindsay. He graduated from... View Obituary & Service Information

The family of Donovan C. Lindsay created this Life Tributes page to make it easy to share your memories.