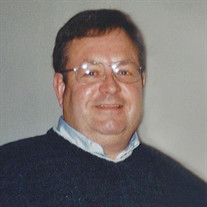 NEW PALESTINE – Donald W. Kottlowski, age 68, passed away at home on Sunday, February 17, 2019 from complications related to traumatic brain injuries suffered in 2012 and 2013. He was the son of Donald L. and Rita (MacIsaac) Kottlowski (deceased) and is survived by his wife of 17 years Rosemarie (Grande) Kottlowski, sons Andrew (Jungy), Thomas (Darla), Steven (Brittany) and Timothy (Hanna); grandchildren Molly, Hayden, Kenzie, Jadey and Sophia Kottlowski; brothers Daniel (Karen), Randy (Charlene) and Roger (Michele) Kottlowski. Don was a lifelong resident of New Palestine, Indiana and graduated from New Palestine High School. He earned an electric engineering degree from Purdue University. As a child he liked to take apart radios and electrical devices and figure out how to fix them. He was intrigued by radio communications and how radios operated and how closely connected they needed to be. This influenced his decision to pursue the field of public safety communications. He enjoyed a 40 year career with Indiana State Police in the telecommunications division which is responsible for maintaining communications with all public safety agencies within Indiana. He was a member of APCO International (Association of Public Safety Communications Officials) where he served in multiple offices including Indiana chapter president, frequency coordinator and regional advisor for 800 MHz and 700 MHz planning for Indiana. Don served multiple years as a board member on the APCO International Executive Council. Don was a devout Catholic and a lifelong member of St. Michael Catholic Church in Greenfield, Indiana where he served on the Parish Council. A mass of Christian Burial will take place on Saturday, February 23, 2019, at 11:00 a.m. at St. Michael Catholic Church, 519 Jefferson Blvd., Greenfield, IN 46140 with interment following at Calvary Cemetery. Calling two hours prior to the mass at the church. In lieu of flowers, memorial contributions may be made to Indiana Troopers Youth Services, Inc (ITYS), ATTN: Sgt. Danielle Elwood, 8660 E. 21st Street, Indianapolis, IN 46219. This organizations sponsors Indiana State Police Youth Camps which provide an opportunity for youth and law enforcement to connect in a positive environment. Arrangements are being handled by Erlewein Mortuary & Crematory in Greenfield.

NEW PALESTINE &#8211; Donald W. Kottlowski, age 68, passed away at home on Sunday, February 17, 2019 from complications related to traumatic brain injuries suffered in 2012 and 2013. He was the son of Donald L. and Rita (MacIsaac) Kottlowski... View Obituary & Service Information

The family of Donald W. Kottlowski created this Life Tributes page to make it easy to share your memories.