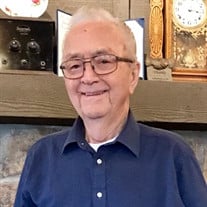 GREENFIELD – Don Harshman, age 86, of Greenfield, passed away on Monday, March 12, 2018 at Hancock Regional Hospital. He was born on February 4, 1932 in Garards Fort, Pennsylvania as the son of Earl and Grace (Jackman) Harshman. He served in the U.S. Army from 1950-1952. Don married Ethel (Roberts) on June 10, 1951 in Angola, IN. He worked at Western Electric as an injection molder for over 30 years before retiring in 1985. Don also worked for the City of Greenfield in the Water and Sewage Department for many years. He was a member of Park Chapel Christian Church and member of Telephone Pioneers of America. He enjoyed landscaping and buying and selling cars. Don was an avid NASCAR fan, loved traveling, and spending time with his family. Don is survived by his daughters, Donna (Ron) Fields and Sandra (Michael) D’Angelo both of Greenfield; siblings, Everett Harshman of Ohio, Caroline Ferencak of Pennsylvania, Dorthea Huntman of Florida, Clarence Harshman of Ohio, Jean Buckingham of Ohio, and June Policz of Pennsylvania; four grandchildren, Jason (Jamie) Free, Melissa (Jeff) Clark, Jeremy Johnson, and Isaac Lines; and seven great-grandchildren. He was preceded in death by his parents, Earl and Grace Harshman; wife, Ethel Harshman; brother, Bill Harshman; and sister, Genevieve Leighty. Visitation will be held on Friday, March 16, 2018, from 5:00 p.m. until 7:00 p.m. at Erlewein Mortuary & Crematory, 1484 W. US Hwy. 40, Greenfield, IN 46140. A funeral service will be held on Saturday, March 17, 2018, at 12:00 p.m. at the mortuary. Pastor David Woods will be officiating. Burial will follow at Park Cemetery in Greenfield with military rites presented by the Greenfield Veterans Honor Guard. Memorial contributions may be made by mail to the American Cancer Society, P.O. Box 22718, Oklahoma City, OK 73123, Park Chapel Christian Church, 1176 E McKenzie Rd, Greenfield, IN 46140 or Greenfield Veterans Honor Guard, 1104 Grayson Drive, Greenfield, IN 46140. Envelopes will be available at the mortuary. Friends may share a memory or a condolence at www.erleweinmortuary.com. Don’s family would like to thank the Hospice and Staff at Hancock Regional Hospital for their loving care and support.

GREENFIELD &#8211; Don Harshman, age 86, of Greenfield, passed away on Monday, March 12, 2018 at Hancock Regional Hospital. He was born on February 4, 1932 in Garards Fort, Pennsylvania as the son of Earl and Grace (Jackman) Harshman. He served... View Obituary & Service Information

The family of Don Harshman created this Life Tributes page to make it easy to share your memories.