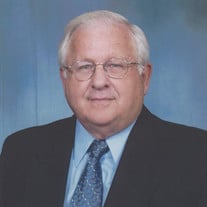 GREENFIELD – Dennis Allen Scott, 79, of Greenfield, Indiana passed away on June 20, 2019 in Greenfield, Indiana. He was born September 1, 1939 in Indianapolis, Indiana to Robert and Thelma (Foreman) Scott. He married Crystal Proper in 1959 and they had three children, Jeffrey, David, and Karen. He later married Linda Waskom of Cambridge City, Indiana on April 11, 1970 and they had one son Michael. Dennis served as a member of the Indiana Air National Guard and the United States Air Force. Dennis was employed as a music teacher in his early years teaching guitar at Harlin Brothers Studio on North Illinois Street, Indianapolis. He joined Eli Lilly and Company in 1957 and worked in Indianapolis, then Greenfield Laboratories where he retired as a Quality Assurance Representative in 1993. Dennis and Linda met at Eli Lilly where they were both employed and were married for 49 wonderful years. Dennis was a 50-year mason and a member of Greenfield Masonic Lodge #101, a member of the Scottish Rite, Indianapolis, and Murat Shrine. He held several positions at Murat including chairman of the medical screening committee, plaque program chairman, president of the Kentucky Colonels Club and Transportation Club and a member of the Royal Order of Jesters. He was awarded Murat “Shriner of the Year” in 2001 and 2008. He was presented a “Man of the Year” award in 2006 by the Transportation Club. However, he was most proud of his appointment as a board member of the Shriners Hospital for Children – Lexington, Kentucky where he served for eighteen years serving on several committees including serving as chairman of the Research Committee for nine years. He was also a member of the Sons of the American Revolution and Royal Order of Scotland. Survivors include his loving wife, Linda L. (Waskom) Scott; four wonderful children, Jeffrey (Susan) Scott of Massillon, Ohio, David (Julie) Scott of Indianapolis, Karen (Robert) Altom of Lindale, Texas, and Michael (Nicole) Scott of Indianapolis; grandchildren, Kaitlyn, Kara (Michael) Gazzo, Mitchell, Lindsey, Jenny, Amelia, and Jonathon. In addition, he is survived by his brother Roland (Betty) Scott of Indianapolis; niece, Angela Lindauer; and nephew, Shaun Scott. Friends may call on Thursday, June 27, 2019, from 4:00 p.m. until 8:00 p.m. at Erlewein Mortuary & Crematory, 1484 W. US Hwy. 40, Greenfield, IN 46140. A masonic service will be held at 7:30 p.m. A funeral service will be held on Friday, June 28, 2019, at 11:00 a.m. at the mortuary. Chaplain David Woods will be officiating. Entombment will follow at Washington Park East Cemetery in Indianapolis. In lieu of flowers, memorial contributions may be made by mail to Shriners Hospital for Children Medical Center, 110 Conn Terrace, Lexington, KY 40502-1204 or envelopes will be available at the mortuary. Friends may share a memory or condolence at www.erleweinmortuary.com.

GREENFIELD &#8211; Dennis Allen Scott, 79, of Greenfield, Indiana passed away on June 20, 2019 in Greenfield, Indiana. He was born September 1, 1939 in Indianapolis, Indiana to Robert and Thelma (Foreman) Scott. He married Crystal Proper in... View Obituary & Service Information

The family of Dennis A. Scott created this Life Tributes page to make it easy to share your memories.