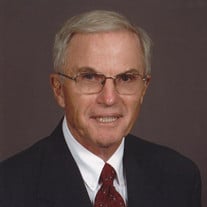 Dennis Carl Chapman lived a happy, accomplished life of almost 90 years filled with love, family, and friends. He passed away suddenly in the early morning of September 11, 2020, in Indianapolis, Indiana, and is survived by his beloved wife of nearly 66 years, Evelyn Carol (Amundson) Chapman. Born on November 13, 1930, Dennis was the third of four children, and only son of Charles Carl and Goldie Ann (Keller) Chapman. His sisters, Mary (Donald, who survives her) Shepherd, Lola (Thomas, deceased) Lane (Richard, deceased) Pickett, preceded him in death, and he is survived by Lois (Richard, deceased) Pippen. He spent almost all of his life as a resident of Greenfield, Indiana. His childhood centered around farm life, including showing Jersey cattle in 4-H. He won the Showmanship Award three times in a row. He later supported his three children Ann (David) Parker, John (Julie), and Carol (Jeff) McCormack as they showed Polled Hereford cattle in 4-H. His children are forever grateful for his love and support and the example he set for them every day. A bright student and valedictorian of the 1948 Greenfield High School class, Dennis graduated from General Motors Institute (now Kettering University) with honors and spent a long and illustrious career as a mechanical engineer. As a Staff Sargent in the U.S. Army, he helped develop the control system linking the Nike Missile Air Defense Batteries surrounding Washington, D.C. He won GM’s coveted Boss Kettering award in 1984 for a breakthrough design on a helicopter engine compressor, which was lauded as twenty years ahead of its time. In 1987, he was part of a group winning the Collier Trophy, the most prestigious American award for aviation or space achievement, for his work on the development of advanced turboprop propulsion concepts. In retirement, Dennis focused on volunteer work, with involvement in several Greenfield organizations, including Bradley United Methodist Church, Kiwanis, the Hancock County Community Foundation, and Hancock Regional Hospital. He was a long-time member of the Masons and the Scottish Rite. He was awarded the Senior Volunteer of the Year for Area 8 by CICOA. In 2014, he was inducted into the Greenfield-Central School Foundation’s Alumni Hall of Fame. He and Evelyn enjoyed extensive world-wide travel. Most importantly, they loved attending their six grandchildren’s events, including baseball and football games, swim meets, wrestling matches, track meets, and dance and vocal performances. His grandchildren, Clint (Esmeralda Barragan) Parker, Justin (Cristina) Chapman, Jarrad Chapman, Erin McCormack (Grant) Braden, Jacob Chapman, and Kiera McCormack feel blessed to have had his guidance, his time, and his unconditional love. Dennis and Evelyn joyfully celebrated the birth of their first great-grandchild earlier this year, Oscar Carl Chapman. Dennis was delighted to have a great-grandson carrying on the family name. Dennis is also survived by cherished family members: sister-in-law Marjorie Amundson (William, deceased) Hamilton, brother-in-law Lee (Judy, deceased) Amundson, sister-in-law Billie Amundson (Marvin) Chasen, and many wonderful nieces and nephews. Visitation will be held on Wednesday, September 16, 2020, from 4:00 p.m. until 8:00 p.m. at Erlewein Mortuary & Crematory, 1484 W. US Hwy. 40, Greenfield, IN 46140. A funeral service will be held on Thursday, September 17, 2020, at 11:00 a.m. at Bradley United Methodist Church, 210 National Rd, Greenfield, IN 46140. Heather Cress will be officiating. Burial will follow at Park Cemetery in Greenfield with military rites presented by the Greenfield Veterans Honor Guard. As a reminder, masks are required in public indoor spaces and please practice social distancing. In lieu of flowers, the family asks that donations be made to the Cargold Scholarship Endowment Fund at the Hancock County Community Foundation (https://givehcgrowhc.org/), a scholarship fund established by Dennis and Evelyn in honor of his parents and named after the Chapman family farm, or to Bradley United Methodist Church (https://bradleyumc.org/). Friends may share a memory or condolence at www.erleweinmortuary.com.

Dennis Carl Chapman lived a happy, accomplished life of almost 90 years filled with love, family, and friends. He passed away suddenly in the early morning of September 11, 2020, in Indianapolis, Indiana, and is survived by his beloved wife... View Obituary & Service Information

The family of Dennis Carl Chapman created this Life Tributes page to make it easy to share your memories.