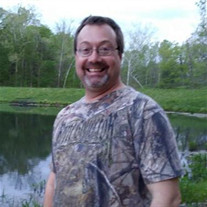 MARTINSVILLE – David T. Wagner, age 47, of Martinsville, passed away on Saturday, February 24, 2018 at St. Francis Hospital. He was born on May 12, 1970 in Batesville, IN as the son of Gerald T. and Elizabeth “Joanne” (Carr) Wagner. David graduated from Batesville High School in 1989. He married Pam (DePangher) Cowan on May 27, 2017 in Gatlinburg, TN. He worked for many different companies as a truck driver and most recently was an Uber Driver in Bloomington, IN. He attended Greenfield Church of God and was a member of the Circle City Aquarium Club. David was an avid hunter and fisherman. He enjoyed spending time with his family and friends. David is survived by his wife, Pam Wagner of Martinsville; children, Joshua Wagner and Sarah Wagner both of Greenwood, IN; step-children, Ashlie (Nicholas) Wiegert of Franklin, IN, Elizabeth Cowan of Beech Grove, IN and Ethan Cowan of Franklin, IN; step-grandson, Jeremiah Wiegert; sisters, Michelle (Butch) McDonald of Rio Rancho, NM and Sharie (DeWayne) Casey of Birmingham, AL; previous wife and friend, Catherine Wagner of Greenwood, IN; two aunts, Dona Babcock of Hesperia, CA and Cindy Nagele of Sheldon, IL; and several cousins. He was preceded in death by his parents; brothers, Thomas and Mike Wagner; and grandparents. Visitation will be held on Friday, March 2, 2018, from 4:00 p.m. until 7:00 p.m. at Erlewein Mortuary & Crematory, 1484 W. US Hwy. 40, Greenfield, IN 46140. A celebration of life service will take place immediately following the visitation at 7:00 p.m. A committal service will take place on Saturday, March 3, 2017, at 12:00 p.m. at St. Mark’s Cemetery in Batesville, IN. Memorial contributions may be made by mail to the Leukemia Research Foundation, 191 Waukegan Road, Ste 105, Northfield, IL 60093 or envelopes will be available at the mortuary. Friends may share a memory or a condolence at www.erleweinmortuary.com.

The family of David T. Wagner created this Life Tributes page to make it easy to share your memories.