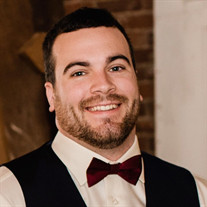 INDIANAPOLIS – David G. Nolen, age 28, of Indianapolis, formerly Morristown, IN, passed away Friday, May 31, 2019. He was born in Greenfield on January 6, 1991, to Hubert and Tonia (Wright) Nolen. He graduated from Morristown High School in 2009. David earned his degree in Christian Leadership at Barclay College in Kansas. He furthered his education at Indianapolis School of Supernatural Ministry, where he continued to lead and teach. He married the love of his life Stephanie G. (Kluger) Nolen on November 4, 2018. David was the associate director and co-founder with his father for Hope Center Indy, an aftercare campus for women coming out of human trafficking. He was a life member of Brookville Road Community Church and attended Overflow Church in Carmel. David was a big fan of sports. He participated in cross country and basketball in junior high and high school. He played basketball for two years in college and was an assistant basketball coach at Morristown High School for a season. David also enjoyed watching the Colts, IU Basketball, and the Pacers with family and friends. David’s biggest passion was leading others to experience the presence and love of God. He was a respected leader with a servant’s heart. David had a strong prophetic gifting, and was bold to share God’s heart with people. He impacted many lives with his kindness, love, and compassion. His family and friends enjoyed his wit and sense of humor. David loved to make people laugh, and he made everyone smile. His life was a reflection of his love for Jesus. He is survived by his wife, Stephanie G. (Kluger) Nolen of Indianapolis; parents, Hubert and Tonia (Wright) Nolen of Morristown; sisters, Sara (Tom) Brooks of Indianapolis, Rachel (Brandon) Kleine of Morristown, Shari (Royce) Bryan of Bolivar, Missouri, and Mary Nolen of Morristown; grandparents, Robert and Phyllis Wright of Shirley, Carma Nolen of Morristown; father and mother-in-law, Robert and Susan Kluger of Noblesville; and several nieces and nephews. He was preceded in death by his grandfather,Virgil Nolen; and niece, Rhea Kleine. Visitation will be held on Tuesday, June 4, 2019, from 3:00 p.m. until 8:00 p.m. at Brookville Road Community Church (7480 W US 52, New Palestine, IN 46163). A celebration of life service will be held on Wednesday, June 5, 2019, at 7:00 p.m. at Brookville Road Community Church. A private burial will take place at Asbury Cemetery. In lieu of flowers, memorial contributions may be made by mail to the Hope Center Indy 11850 Brookville Rd, Indianapolis, IN 46239 or envelopes will be available at the church. Friends may share a memory or a condolence at www.erleweinmortuary.com. Arrangements are being handled by Erlewein Mortuary & Crematory in Greenfield.

INDIANAPOLIS &#8211; David G. Nolen, age 28, of Indianapolis, formerly Morristown, IN, passed away Friday, May 31, 2019. He was born in Greenfield on January 6, 1991, to Hubert and Tonia (Wright) Nolen. He graduated from Morristown High School... View Obituary & Service Information

The family of David G. Nolen created this Life Tributes page to make it easy to share your memories.