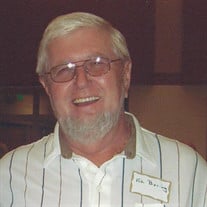 NEW PALESTINE – Charles Victor “Vic” Boring, age 77, of New Palestine, passed away Thursday, November 28, 2019 at his home after a short battle with cancer. He was born on February 4, 1942 to Charles Virgil and Hazel (Landwehr) Boring and raised at the family’s long-time homestead at the intersection of 600 West and Highway 52. He married the love of his life, Kay (Andis) in 1980. Just out of high school, he worked a few jobs before becoming the top salesman at the Sears and Roebuck fencing department for many years. He owned and operated Vic Boring Trucking in New Palestine for several years. Along with his business partner Don Myers, he built Frosty Boy in 1976 and later Frosty Foods. Vic hauled several things, but his latest endeavor was pool water. Mr. Boring was a member of New Palestine Christian Church (Disciples of Christ) and was on the New Palestine Cemetery board. He was a 32nd degree Mason and a Shriner. Vic was a member of the Florida Flywheelers Antique Engine Club and the Shelbyville American Legion. He enjoyed riding motorcycles, dinners out with friends, and travelling in his motor home to attend antique tractor shows where he and Kay would make magnetic signs to sell. He was also a member of the round table at Round the Corner Pub. Vic had a large social circle and spent lots of time with friends, including years of weekly poker nights. He is survived by his wife, Kay Boring of New Palestine; daughter, Kelly Woodworth of Largo, FL; son, Eric Nigh of St. Paul; two grandchildren, Corey Woodworth and Derick Nigh; cousin, Steve Abel; niece, Phyllis Turner; and three great-nephews, Randy (Kasi) Turner, Jim Turner, and Terry (Jordan) Turner. He was preceded in death by his parents, Charles Virgil and Hazel (Landwehr) Boring; and two sisters, Ruby Parrott and Helen Gebhart. Visitation will be held on Tuesday, December 3, 2019, from 4:00 p.m. until 8:00 p.m. at Erlewein Mortuary & Crematory, 1484 W. US Hwy. 40, Greenfield, IN 46140. A funeral service will be held on Wednesday, December 4, 2019, at 11:00 a.m. at Erlewein Mortuary & Crematory. Rob Walker will be officiating. Burial will follow at New Palestine Cemetery in New Palestine. In lieu of flowers, memorial contributions may be made by mail to the American Cancer Society at 5635 W 96th St Suite 100, Indianapolis, IN 46278 and Juvenile Diabetes Association at 26 Broadway, 14th floor, New York, NY 10004, by website at www.jdrf.org, or envelopes will be available at the mortuary. Friends may share a memory or condolence at www.erleweinmortuary.com.

The family of Charles "Vic" Boring created this Life Tributes page to make it easy to share your memories.