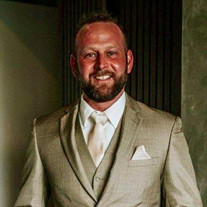 FORTVILLE – Charles H. Theobald IV, age 45, of Fortville, passed away on Sunday, September 8, 2019. He was born in Richmond on August 15, 1974 to Charles H. Theobald III and Susan Cotter. He graduated from Richmond High School in 1992. He served in the U.S. Marines from January 24, 1994 through January 23, 1998. Charles married Britany (Fitzwater) on March 16, 2017 in Dominical, Costa Rica. He was a member of the Fortville American Legion Post 391, the National Rifle Association, and was the President of the Hancock County Friends of NRA. Charles enjoyed hiking, camping, traveling, scuba diving, and riding motorcycles. Charles was a big supporter of the bill of rights and was a fighter of the 2nd Amendment. He was full of integrity and very admired and loved by all. He loved animals, especially his dogs. Charles most of all loved being a father to his daughters. Charles is survived by his wife, Britany Theobald of Fortville; father, Charles Theobald III of Greenfield; step-mother, Saundra Theobald of Greenfield; mother, Susan Cotter of Fortville; daughters, Sydera Theobald of Lawrence, Chelsea Theobald of Bloomington, Brielle Theobald of Fortville, and one daughter on the way; sisters, Leslie Theobald of Rhode Island and Nichole (Dan) Lynch of Lawrence; grandmother, Shirley Lorenz of Eaton, OH; step-grandparents, Ronald and Dorothy Dettlinger of Greenfield; Mikel Theobald, mother of Sydera, Chelsea, and Brielle; and several nieces and nephews. He was preceded in death by his grandparents, John Edwin, Waneta Cotter, and Charles H. Theobald, Jr.; uncle, Phillip Theobald; and a cousin, Richard Corey Cotter. Visitation will be held on Friday, September 13, 2019, from 4:00 p.m. until 8:00 p.m. at Brandywine Community Church, 1551 E. New Rd, Greenfield, IN 46140. A funeral service will be held on Saturday, September 14, 2019, at 11:00 a.m. also at the church. Luke Fitzwater will be officiating. Burial will follow at Park Cemetery in Greenfield with military rites presented by the United States Marine Corps. In lieu of flowers, memorial contributions may be made by mail to the Semper Fi Fund, 825 College Blvd, Suite 102, PMB 609, Oceanside, CA 92057 or Folds of Honor, donate by phone 918-274-4700 or online at https://www.foldsofhonor.org/donate/. Envelopes will be available at the church. Friends may share a memory or condolence at www.erleweinmortuary.com. Arrangements are being handled by Erlewein Mortuary & Crematory in Greenfield.

The family of Charles H. Theobald IV created this Life Tributes page to make it easy to share your memories.