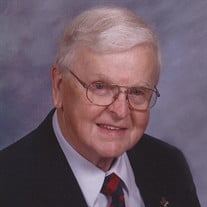 GREENFIELD - Charles E. “Chuck” Condra, age 90, of Greenfield, passed away Friday, November 1, 2019 at Rawlin’s House. He was born in Paoli, Indiana on February 12, 1929 to Charles R. and Maude J. (McCabe) Condra. He graduated from Bloomington High School in 1947 and served in the Army Air Corps and Air Force from 1947-1950. Chuck married Maxine B. (Brosman) on June 8, 1948 in Bloomington. He was an independent sales manager for Allstate Insurance Company in Indianapolis for 24 years before retiring in 1984. After retiring from Allstate he worked in real estate including time with Justus. Prior to working at Allstate he was a store manager at A&P Stores for 12 years. Chuck held various local and state positions with Lions Club including past president, state Lion chair, and cancer control board. He was appointed to the board of trustees for IU Med Center Cancer Control. He was the founder of the Lions Camp Woodsmoke and ran it for 35 years. In 2019, Chuck received the lifetime achievement award from the Greenfield Lions Club. He was a member of Trinity Park United Methodist, where he was a past worship leader. Chuck enjoyed flying and was an amateur pilot and also enjoyed taking art classes at the senior center. He was an avid IU and Colts fan. Chuck enjoyed being a family man and strong patriarch of the family. He will be remembered for his laughter, faith, community service, and leadership. Chuck is survived by his daughters, Debra (Paul) Fisher, Charla Condra and Penny Gamble; six grandchildren, Christopher (Tracy) Fisher, Timothy (Jennifer) Fisher, Benjamin (Brandy) Fisher, Chelsea Fox, Emily Gamble, and Zachary Gamble; six great-grandchildren, Riley, Maggie, Anderson, Lucy and Alice Fisher, and Elliana Terbrueggen; sister, Bonnie Clendening; daughter-in-law, Jackie Cecil; several nieces and nephews; step grandchildren, Christopher (April) Fetz and Drew Fetz; step-great grandchildren, Brea and Cydnee Fetz. He was preceded in death by his parents, Charles and Maude Condra; wife, Maxine Condra; son, Richard J. Condra; and brother, Phillip Condra. Visitation will be held on Monday, November 4, 2019, from 10:00 a.m. until 1:00 p.m. at Trinity Park United Methodist Church, 207 W. Park Avenue, Greenfield, IN 46140. A funeral service will take place immediately following the visitation at 1:00 p.m. Pastor Larry Van Camp and Rev. Mike Manning will be officiating. Burial will follow at Park Cemetery in Greenfield. In lieu of flowers, Memorial contributions may be made by mail to Greenfield Lions Club, c/o Erlewein Mortuary, 1484 W. US Hwy. 40, Greenfield, IN 46140 or Trinity Park United Methodist Church, 207 W. Park Avenue, Greenfield, IN 46140. Envelopes will be available at the church. Friends may share a memory or condolence at www.erleweinmortuary.com. Arrangements are being handled by Erlewein Mortuary & Crematory in Greenfield.

The family of Charles "Chuck" Condra created this Life Tributes page to make it easy to share your memories.