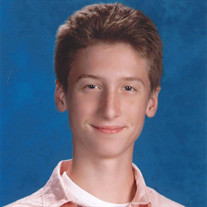 NEW PALESTINE – Charles Frederick “Carter” Gorth V, age 15, of New Palestine, passed away on Monday, May 13, 2019. He was born in Indianapolis on December 10, 2003 to Charles Frederick Gorth IV and Amber N. (Butcher) Gorth-Sullivan. Carter was a freshman at New Palestine High School. He loved hunting, girls, fishing, girls, camping, girls, horseback riding, and girls. He loved his majestic hair, insisting it only be cut by professionals He was a beautiful young man that cared deeply about people and animals. He loved without hesitation and never carried judgement or grudges. He was the apple of his parents’ eyes. He didn’t care for sports much, even though he ran like lightening and could throw the perfect spiral. He was proud, patient, attentive, and protective in his cherished role as a big brother to a brother and sister just as he was in his role as a younger brother to his two older sisters. He was fearless yet cautious, he was intelligent, funny, and the world is a brighter place because of him. He will be missed but never forgotten and will remain a miracle forever. Carter is survived by his mother, Amber Gorth-Sullivan of New Palestine; father, Charles Gorth IV of New Palestine; brother, Dave Gorth; sisters, Stella Jo Sullivan, Lauren Hipple, and Caroline Dunbar; stepfather, Jeffrey Sullivan; stepmother, Christi Gorth; and grandparents, Bill & Debbie Bolander of Lake Suzy, Florida and Charles & Patricia Gorth III of Greenfield. He was preceded in death by his grandfather, Charles Butcher; grandmother, Marilyn Butcher; great-grandfather, Ralph Wales; great-aunt, Deanna Chance; great-grandparents, Dolores Kucia, Edward Kucia Sr., Charles Gorth Jr., and Katherine Gorth; and cousins, Edward Kucia III and Timothy Wilson. Visitation will be held on Friday, May 17, 2019, from 3:00 p.m. until 8:00 p.m. at Brookville Road Community Church, 7480 US-52, New Palestine, IN 46163. A funeral service will be held on Saturday, May 18, 2019, at 10:00 a.m. at the church. Pastor Jason Taylor will be officiating. Burial will follow at Glen Cove Cemetery in Knightstown. In lieu of flowers, memorial contributions may be made by mail to the CYO Camp Rancho Framasa, 2230 N. Clay Lick Rd., Nashville, IN 47448 or Hancock County Humane Society, 214 E. Main Street, Greenfield, IN 46140. Envelopes will be available at the church. Friends may share a memory or a condolence: www.erleweinmortuary.com. Arrangements are being handled by Erlewein Mortuary & Crematory in Greenfield.

The family of Charles "Carter" Gorth V created this Life Tributes page to make it easy to share your memories.