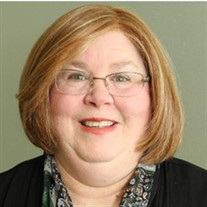 NEW PALESTINE – Cathy Lynn (Deskins) Canny, age 63, of New Palestine, passed away Tuesday, January 11, 2022 at Hancock Regional Hospital. She was born in Columbus, Ohio on November 30, 1958 to Jean (Rife) Deskins and Cecil Deskins. She was a 1976 graduate of Marion-Franklin High School and a 1987 graduate of St. Mary of the Woods College. On December 18, 1976, Cathy married Mike Canny in Columbus, Ohio. Cathy was a woman of deep faith who lived a legend of a love story with her husband Mike. She raised two of the most incredibly tough women with true grit, solid heads on their shoulders and a zest for life. She fought and beat cancer twice like a boss because it was never a match for her. She worked for Taft Law as a senor paralegal for many years. Professionally, you should look her up. She helped organize the Indiana Registered Paralegal Program for the Indiana State Bar association. She was the past president of the Indiana Paralegal Association. She was a past chair of the Affiliate Membership Committee for the Indiana State Bar and the Paralegal Committee for the Indianapolis Bar Association. She nearly single-handedly demonstrated that paralegals are not a nicety, they are an indispensable part of a legal team and law firm. She’s been awarded the Lifetime Achievement Award from the Indiana Paralegal Association as well as Leadership in Law from the Indiana Lawyer. She won more awards and had more accolades than we can afford to mention. She was one of a kind. She cannot be replaced and she will be forever missed. Cathy is survived by her husband of 45 years, Mike Canny of New Palestine, daughters, Kristin Canny of Greenfield and Heather Canny (Justin Thomas) of Mableton, GA. Grandchildren, Caleb Mullins, Aidan Canny, and Caleb Stephens. Sister, Debbie Deskins of Grove City, OH and Aunt Missy of Terre Haute, IN and our official family labradoodle, Theodore Lincoln. She was preceded in death by parents, Jean and Cecil Deskins; and brother, Dennis Deskins. There will be a Celebration of Life announced in the spring. Arrangements are being handled by Erlewein Mortuary & Crematory in Greenfield. In lieu of flowers, memorial contributions may be made by mail to Park Chapel Christian Church, 1176 E McKenzie Rd, Greenfield, IN 46140 or by website at https://parkchapel.breezechms.com/give/online. Friends may share a memory or condolence at www.erleweinmortuary.com.

The family of Cathy Canny created this Life Tributes page to make it easy to share your memories.