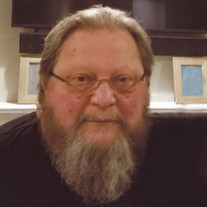 GREENFIELD - Carl W. Swift, age 77, of Greenfield, passed away Saturday, August 3, 2019 at his residence surrounded by his loving family. He was born in Indianapolis on April 10, 1942 to George and Mary (Mulinaro) Swift. He graduated from Greenfield High School in 1961, and enlisted in the U.S. Navy, serving during the Vietnam War from 1963-1967. Carl married the love of his life, Judy, on February 5, 1971 in Greenfield. Carl spent most of his career working for National Wine & Spirits before retiring in 2001. He was a proud U.S. Navy Veteran and was a member of the Greenfield American Legion Post #119 and the Greenfield V.F.W. Post #2693. Carl was known as the ‘rock’ to his family – an amazing husband, papaw, and person overall. He’s known for his big smile, selfless attitude, and strong frame with a big heart. He brought light wherever he went and would attract a party – socializing with any and all but also loved being at home or taking long drives in his truck listening to smooth jazz. There is so much to say but to sum it up – Carl Swift is irreplaceable as a man who meant so much, to so many. Carl is survived by his wife, Judy Swift of Greenfield; son, Michael (Becky) Swift of Greenfield; daughter, Angela (Alex) Hall of McCordsville; sister, Maria (Fred) Johnson of Florida; grandchildren, Ethan and Caleb Swift; and Dorian, Julius, and Elena Hall. He is preceded in death by his parents mentioned above; and brother, Joseph Swift. Visitation will be held on Wednesday, August 7, 2019 from 4:00pm to 8:00pm at Erlewein Mortuary & Crematory, 1484 W. US. HWY. 40, Greenfield, IN 46140. A Mass of Christian Burial will take place at 11:00am on Thursday, August 8, 2019 at St. Michael Catholic Church, 519 Jefferson Blvd., Greenfield, IN 46140. Fr. Aaron Jenkins will be presiding. Burial will follow at Park Cemetery in Greenfield with military honors rendered by the U.S. Navy and Greenfield Veterans Honor Guard. Memorial contributions may be made by mail to St. Michael’s Catholic Church, Connecting our Mission, Growing our Faith Campaign, 519 Jefferson Blvd., Greenfield, IN 46140, or envelopes will be available at the mortuary/church. Friends may share a memory or condolence at www.erleweinmortuary.com. Arrangements are being handled by Erlewein Mortuary & Crematory in Greenfield.

GREENFIELD - Carl W. Swift, age 77, of Greenfield, passed away Saturday, August 3, 2019 at his residence surrounded by his loving family. He was born in Indianapolis on April 10, 1942 to George and Mary (Mulinaro) Swift. He graduated from... View Obituary & Service Information

The family of Carl W. Swift created this Life Tributes page to make it easy to share your memories.