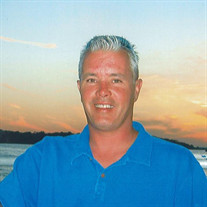 Oakland, Illinois – Brent Christopher Ebert, age 58, of Oakland, Illinois and formerly of Greenfield, passed away Saturday, July 17, 2021, in Shawano, Wisconsin. He was born in Greenfield on June 16, 1963, to Donald Ebert and Rebecca F. Kramer. He attended Greenfield Central High School and graduated in 1981. Brent was a Karting Coach for many years and most recently worked with Team Petty Racing. He was deeply involved in the Karting industry and loved all motorsports. He made an immeasurable impact on the racing community as a mentor, coach and friend. Brent also enjoyed hunting, fishing, camping, scuba diving, skiing, and traveling. He was an adventure seeker who made friends wherever he went. He was a free spirit who loved spending time in the Florida Keys, gave Captain Jack Sparrow a run for his money when donning his pirate garb, felt at home in tiki huts and had a passion for swimming with sharks. He had the courage to live a life that was uniquely him, doing what he loved. Brent was one of a kind. The best parent, son, brother, uncle and friend anyone could ask for. He is survived by his daughter, Cierra Dawn “C” Ebert of Indianapolis; mother, Rebecca Kramer of Greenfield; father and stepmother, Donald (Sharon) Ebert of Indianapolis; sister, Jill (Kent) McQueeney of Greenfield; stepbrother, Jason Poteet of Edina, Minnesota; niece, Anna McQueeney of Greenfield; and his granddog, Lotto. He was preceded in death by his grandparents, Rosanna and Herbert Kramer; uncle, Robert Kramer; and cousin, Robert Kramer, Jr. A Celebration of Life Gathering will be held at Erlewein Mortuary & Crematory in Greenfield, Indiana on Saturday, August 7, 2021, from 1:00 p.m. to 4:00 p.m. Eastern with a service immediately following at 4:00 p.m. Pastor Steve Brackney will be officiating. To honor Brent, family is encouraging attendees to wear casual attire (shorts, tshirts, racing attire and Hawaiian shirts welcome). In lieu of flowers, memorial contributions may be made in Brent’s honor to Driving for Dyslexia or American Heart Association.

Oakland, Illinois &#8211; Brent Christopher Ebert, age 58, of Oakland, Illinois and formerly of Greenfield, passed away Saturday, July 17, 2021, in Shawano, Wisconsin. He was born in Greenfield on June 16, 1963, to Donald Ebert and Rebecca... View Obituary & Service Information

The family of Brent Christopher Ebert created this Life Tributes page to make it easy to share your memories.