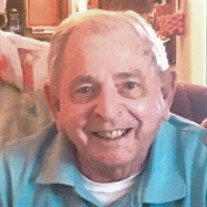 GREENFIELD – Billy Alan Cox, 89 years of age, and a 49-year resident of Greenfield, passed away on Friday, February 18, 2022 at his home. He was born in the old Brightwood community, in Indianapolis, on August 3, 1932 to George Kermit Cox and Reba (Edwards) Cox. He graduated from Arsenal Technical High School in 1962, after serving in the United States Navy from 1951 to 1954. After his military service, he worked at Western Electric, as a supervisor, where he met the love of his life, Marie Campbell, whom he married on July 14, 1956 and whom he is survived by. Billy and Marie were married 65 years and were parents to 2 sons, Donald J. Cox (Ashley) and Brian Alan Cox (Tammie). He will be very much missed by his loving family that survives him, which includes wife Marie, sons Don and Brian, as well as his two twin granddaughters, Karina (Joe) Wellman and Rebecca Cox (Brent Morris) and grandson, Ryan Barkdull (Courtney). He is survived by his great grandchildren, Olive Faith Morris, Lee Elliott Wellman, Drew Barkdull and Emily Barkdull; as well as a sister, Janet (Michael) Reese of Danville, Indiana. He was preceded in death by his afore mentioned parents and siblings, Lulu Owens, Marilyn Bivens, Toby Cox and Bruce (Bucky) Cox. Billy was a proud member of Keystone Masonic Lodge #251 for 50 years, American Legion Post #119 and the VFW. He was a Boy Scout master of Troop 286 from 1969-1973. He was very much and “outdoors” man, enjoying camping at his 2nd home at Melissa Lake, as well as fishing and hunting. All these activities were enjoyed with his wife, sons, grandchildren, and friends. Visitation will be held on Thursday, February 24, 2022, from 3:00 p.m. until 7:00 p.m. at Erlewein Mortuary & Crematory, 1484 W. US Hwy. 40, Greenfield, IN 46140. A funeral service will take place immediately following the visitation at 7:00 p.m. Chaplain Katherine Murray will be officiating. Inurnment will take place at Washington Park East Cemetery on a later date. In lieu of flowers, memorial contributions may be made by mail to the Alzheimer’s Association, Greater Indiana Chapter, 50 E 91st St #100, Indianapolis, IN 46240. Friends may share a memory or condolence at www.erleweinmortuary.com.

GREENFIELD &#8211; Billy Alan Cox, 89 years of age, and a 49-year resident of Greenfield, passed away on Friday, February 18, 2022 at his home. He was born in the old Brightwood community, in Indianapolis, on August 3, 1932 to George Kermit... View Obituary & Service Information

The family of Billy Cox created this Life Tributes page to make it easy to share your memories.