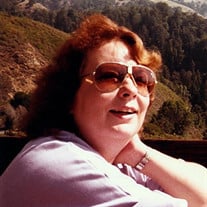 Betty Lou Stocklin (née French), 80, of Indianapolis “checked out” (Betty’s pet expression) early Thursday morning on April 4, 2019 in Shelbyville. She was born in Rushville on April 13, 1938 and grew up in Manilla where she married Howard Stocklin in 1954. They had one son, who survives, Rex (Suzanne) Stocklin of Portland, Oregon. She lived the majority of her life on Indy’s Eastside and worked for 50+ years as a hairdresser, having graduated from The House of James Beauty College. Her tough love, big heart, honesty, bravery and humor touched many and its absence cannot be understated. She was also survived by her sisters, Sue Clements of Shelbyville and Ann (Jim) Graf of Barstow, California; and nieces and nephews: Gerald (Cathy) Clements, Don Clements, Jan (Murray) Alford, Trina Clements and Matthew Tedlock. She was preceded in death by parents Cary and Virginia Ruth (Owens) French; aunt and uncle, Mary Lou and George Garver; infant sister Rosemary Powell and brother-in-law, Buddy Clements. A gathering of family and friends will be held on Saturday, April 13 from 2-5pm at Maxim Events, 420 Eastern Ave., Shelbyville. Memorial contributions may be made by mail to The Wheeler Mission, 205 East New York Street, Indianapolis, IN 46204, or online at: https://wheelermission.org/donate-to-wheeler/ Friends may share a memory or a condolence at www.erleweinmortuary.com. Arrangements are being handled by Erlewein Mortuary & Crematory in Greenfield.

The family of Betty Lou Stocklin created this Life Tributes page to make it easy to share your memories.