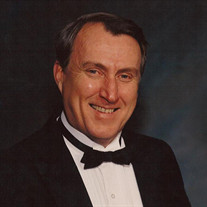 NEW PALESTINE – Bernard W. Seifert, age 80, of New Palestine, passed away on Thursday, June 7, 2018 in his home surrounded by his family. He was born in Indianapolis on November 19, 1937, to the late Lee and Clara (Lenihan) Seifert. He graduated from New Palestine High School in 1955. Bernard married Faustine Goodman on April 25, 1959 at St. Michael’s Catholic Church in Greenfield, Indiana. Bernie is survived by his loving wife of 59 years, Faustine; daughters, Denise (Rick) Peyton; Lori (Todd) Harris; sons Christopher (Darlene) Seifert; James Seifert; and Benjamin (Karie) Seifert; ten grandchildren, Alison, Jane, Andrew, Matthew, Patrick, Abigail, John, Luke, Sarah, and Jordan; great-grandson, Theodore; brother, Michael; sisters, Mary Willman and Kay Ellis. He was preceded in death by his parents; brothers, Joseph and John; and sisters, Anna Breunig and Carolyn McKeeman. Bernie was a steamfitter working with the Local 440 and UAW Local 1111. He was employed at Ford Motor Company where he retired in 1999. Bernie was an avid sports fan, loving Notre Dame Football and Purdue and Butler basketball. He enjoyed all New Palestine sports and loved watching his children and grandchildren compete. He and Faustine instilled in their children to be a good person and always walk the extra mile in your work and relationships. Bernie was always there to lend a helping hand, a listening ear, and advice that people always took with them. He had a keen sense of wisdom and an all-knowing smile; more importantly, a loving heart for all he came in contact with. He will be missed by not only his family, but his friends and the friends of his children, all of which hold him in high esteem. Bernie would often say, “Show me the company you keep and I’ll show you the type of person you are”. Bernie must have only held the best of company as he was respected and highly regarded by all who knew him. Bernie had a full, wonderful, and meaningful life. He will be greatly missed. Visitation will be held on Sunday, June 10, 2018, from 4:00 p.m. until 8:00 p.m. at Erlewein Mortuary & Crematory, 1484 W. US Hwy. 40, Greenfield, IN 46140. A mass of Christian burial will be held on Monday, June 11, 2017, at 11:00 a.m. at St. Michael’s Catholic Church, 519 Jefferson Blvd, Greenfield, IN, 46140. Father Stephen Banet will be officiating. Burial will follow at New Palestine Cemetery in New Palestine. Memorial contributions may be made the St. Joseph’s School Lakota in South Dakota (www.stjo.org/flowers); the New Palestine High School Athletic Department, NPHS Athletic Department PO Box 448, 4485 South Victory Lane, New Palestine, IN, 46163; or the St. Michael’s Building Fund, 519 Jefferson Blvd, Greenfield, IN, 46140. Friends may share a memory or a condolence at www.erleweinmortuary.com.

NEW PALESTINE &#8211; Bernard W. Seifert, age 80, of New Palestine, passed away on Thursday, June 7, 2018 in his home surrounded by his family. He was born in Indianapolis on November 19, 1937, to the late Lee and Clara (Lenihan) Seifert. He... View Obituary & Service Information

The family of Bernard W. Seifert created this Life Tributes page to make it easy to share your memories.