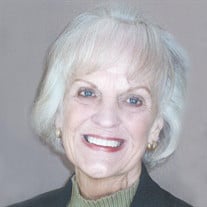 NEW PALESTINE - Barbara Ann (Absher) Tucker of New Palestine, IN, age 82, passed away peacefully at home on June 28, 2019. She was born in Vincennes, IN on November 10, 1936. She was the daughter of Ralph Absher and Dovie Opal (Fields) Absher, who preceded her in death. The family moved to Indianapolis and they lived in the Riverside area of town. She graduated from Public School #44 and Arsenal Technical High School. She met her husband Victor Tucker at Tech High School in April, 1951 and they were married on July 19, 1953, just 3 weeks short of 66 years before her death. They had three children, Steven W. Tucker, Brenda J. Tucker, and Darren L. Tucker. Darren preceded her in death in 2012. Steven is married to Kellie and they have three children, Ashlie D., R. Nicholas, and Joel M. Tucker. Nick’s wife is Kara. Brenda has two sons, Aaron L. Tucker, and Austin W. Gautier. Aaron’s wife is Heather, and they have a son, Mathys. Austin serves in the United States Air Force and is stationed at Nellis Air Force Base in Las Vegas, Nevada. Darren had three children, Jayde S. Wall married to Jeremy Wall, Kalli R. Shepler-Tucker, and Weston D. L. Tucker. All live in the Indianapolis/New Palestine area. She was also preceded in death by sisters Fern Dunfee and Henrietta Larison and brothers Ralph and Jack Absher. She is survived by one sister, Melba V. Brodnax of Indianapolis. Barbara and Victor purchased the New Palestine Press weekly newspaper in July of 1969 where she was the editor and photographer and he was the publisher for 30 years, retiring in 1999. She was also a portrait and wedding photographer for over 20 years. She was a charter member of Community Christian Church for 55 years, where she taught Sunday School, the adult women’s Bible Study, was president of the Ladies Group, and held various other responsibilities in the church. She was a member of the Friendly Neighbors Home Extension Club and won several blue ribbons during Riley Days. She served as club secretary, treasurer, and devotion leader. She was also a member of the elderly group The New Pals. She was always busy donating her time and talent to many organizations. When her children were younger she was president of the New Palestine Kindergarten and treasurer of the New Palestine School Parent-Teacher Organization. After retirement she and her husband traveled extensively and they visited 47 of the 50 United States including Hawaii and Alaska, 10 of the Canadian Provinces, 26 of the European Countries, Egypt, the Holy Land, Turkey, Australia, New Zealand, Fiji, Central and South America, and six of the seven continents missing only Antarctica. Her greatest passion was her love for her Lord Jesus Christ and her great love for her family, whom she cared for so very much. Gathering will be held on Saturday, August 24, 2019, from 2:00 p.m. until 4:00 p.m. at Community Christian Church, 3123 S. 500 W., New Palestine, IN 46163. A celebration of life service will take place following the gathering at 4:00 p.m. Minister Todd Beale will be officiating. In lieu of flowers, memorial contributions may be made by mail to the Community Christian Church, PO Box 590, New Palestine, IN 46163, or envelopes will be available at the church. Friends may share a memory or condolence at www.erleweinmortuary.com. Arrangements are being handled by Erlewein Mortuary & Crematory in Greenfield.

NEW PALESTINE - Barbara Ann (Absher) Tucker of New Palestine, IN, age 82, passed away peacefully at home on June 28, 2019. She was born in Vincennes, IN on November 10, 1936. She was the daughter of Ralph Absher and Dovie Opal (Fields) Absher,... View Obituary & Service Information

The family of Barbara Ann Tucker created this Life Tributes page to make it easy to share your memories.